What is Dimensionality Reduction?

Data collection rate has significantly increased in recent years. As data generation and collection keeps increasing, understanding visualizing and drawing inferences from data becomes more challenging. For example, visualizing two-dimensional data with features X, Y can be done easily using a scatter plot whereas if you have data with 5 dimensions it is impossible to visualize that data using traditional techniques. Hence, dimensionality reduction helps in solving this issue. Below are some benefits applying dimensionality reduction to a dataset.

In this section we will be discussing three common dimensionality reduction techniques that are widely used and implemented using python and scikit-learn.

Although t-SNE works well on large datasets, it is neither efficient in computation time nor in meaningfully representing large scale information. UMAP is another technique that has the capability to preserve the local and global structure of data with less computation time.

This section describes an example of how to create and deploy a model using CML.

Using CML, you can deploy a Machine Learning model via a REST API. This API will accept input variables and return a prediction. For the purpose of this tutorial, we are going to create a model that will demonstrate the concepts of PCA, TSNE and UMAP dimensionality reduction techniques using scikit-learn. To run this project, you will  need to set up your environment. Follow the steps below.

First, create a new project. Note that models are always created within the context of a project.  Name your project and pick python as your template to run the code. 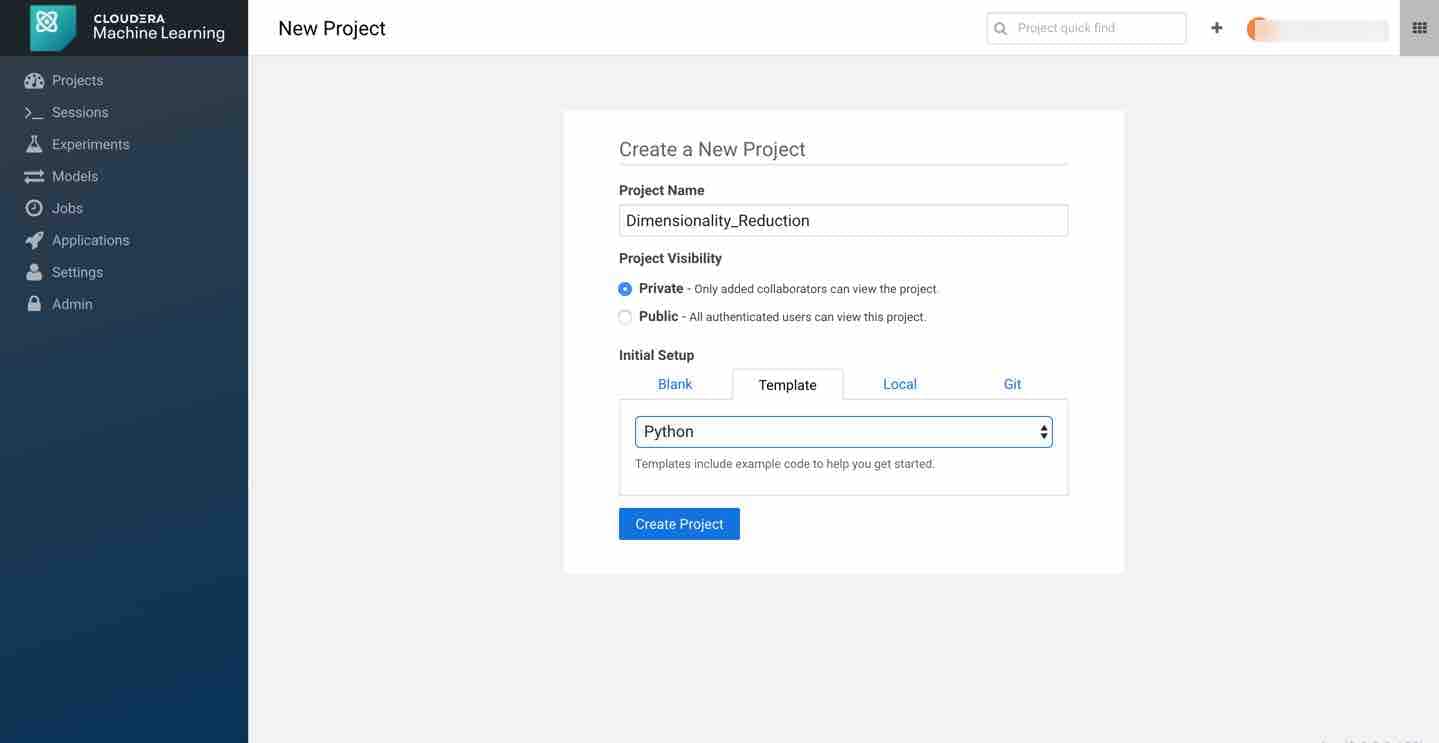 Click Open Workbench and launch a new Python 3 session. You have flexibility to choose either a Jupyter notebook or a workbench. In this tutorial we will import the code into the workbench and run the code. 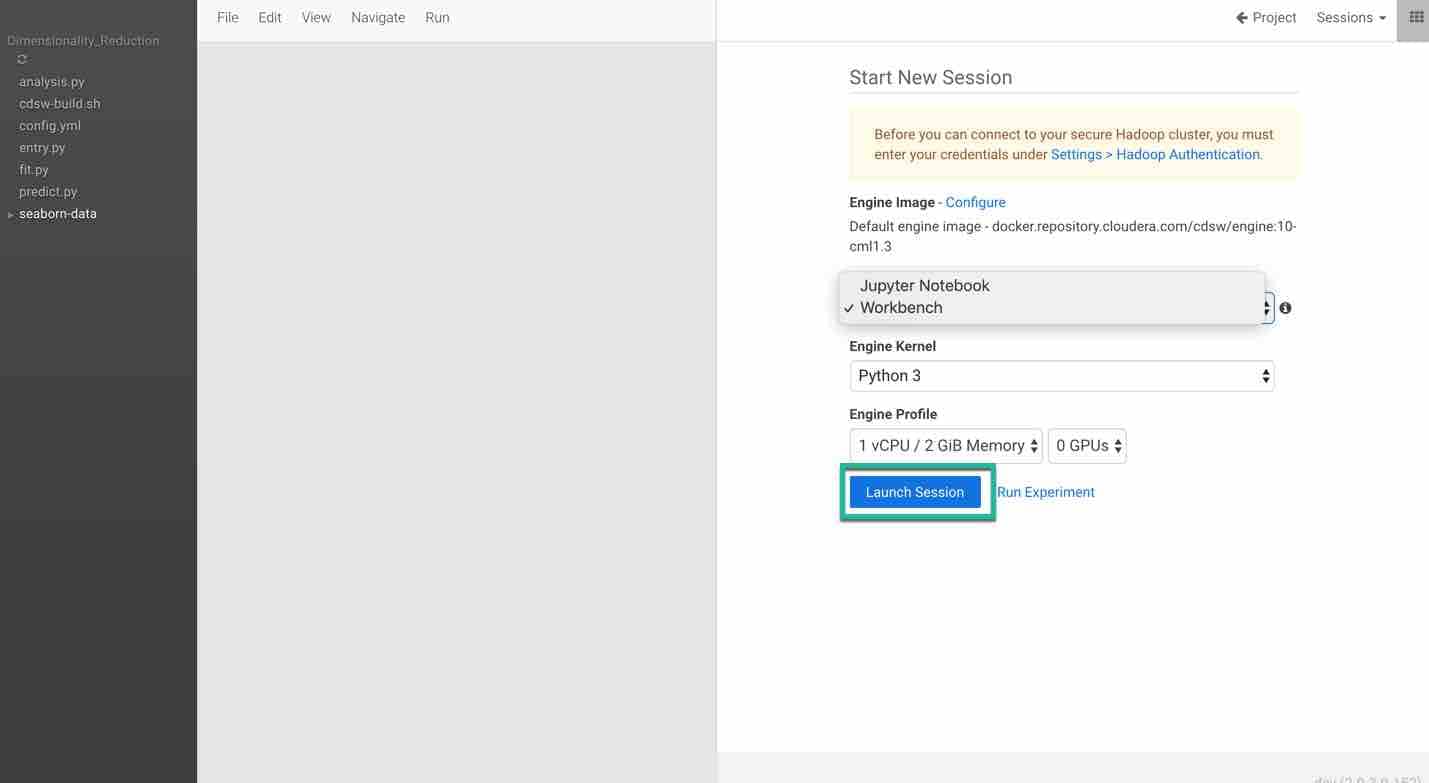 Next, download the code snippet and unzip it on your local machine. Upload pca_compute.py file using the upload option in the CML project overview page to execute the code and visualize the results.

Once the file is uploaded successfully, provision your workspace by clicking on Open Workbench in the top right of the overview page. 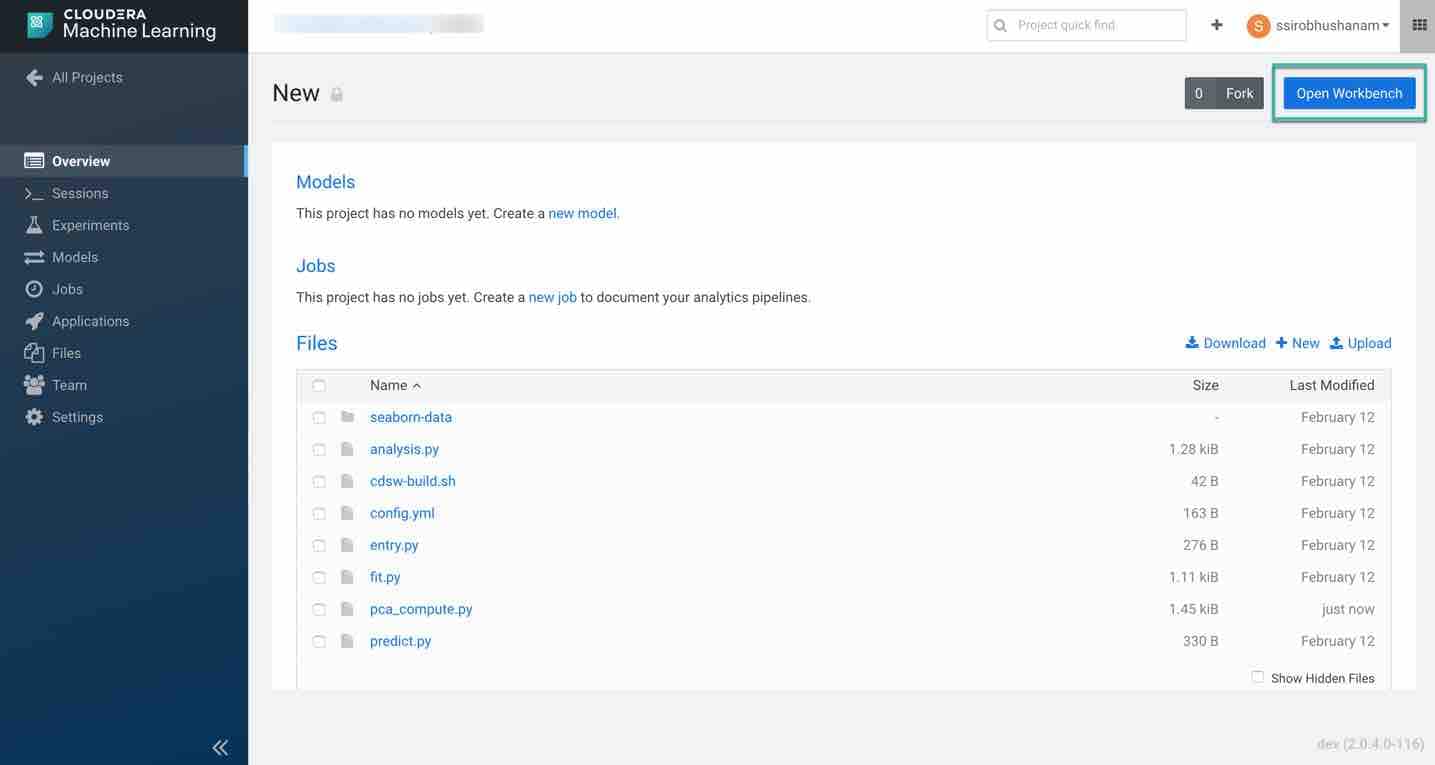 Click on Launch Session and select pca_compute.py in the left pane. The code in the workspace should look as below. 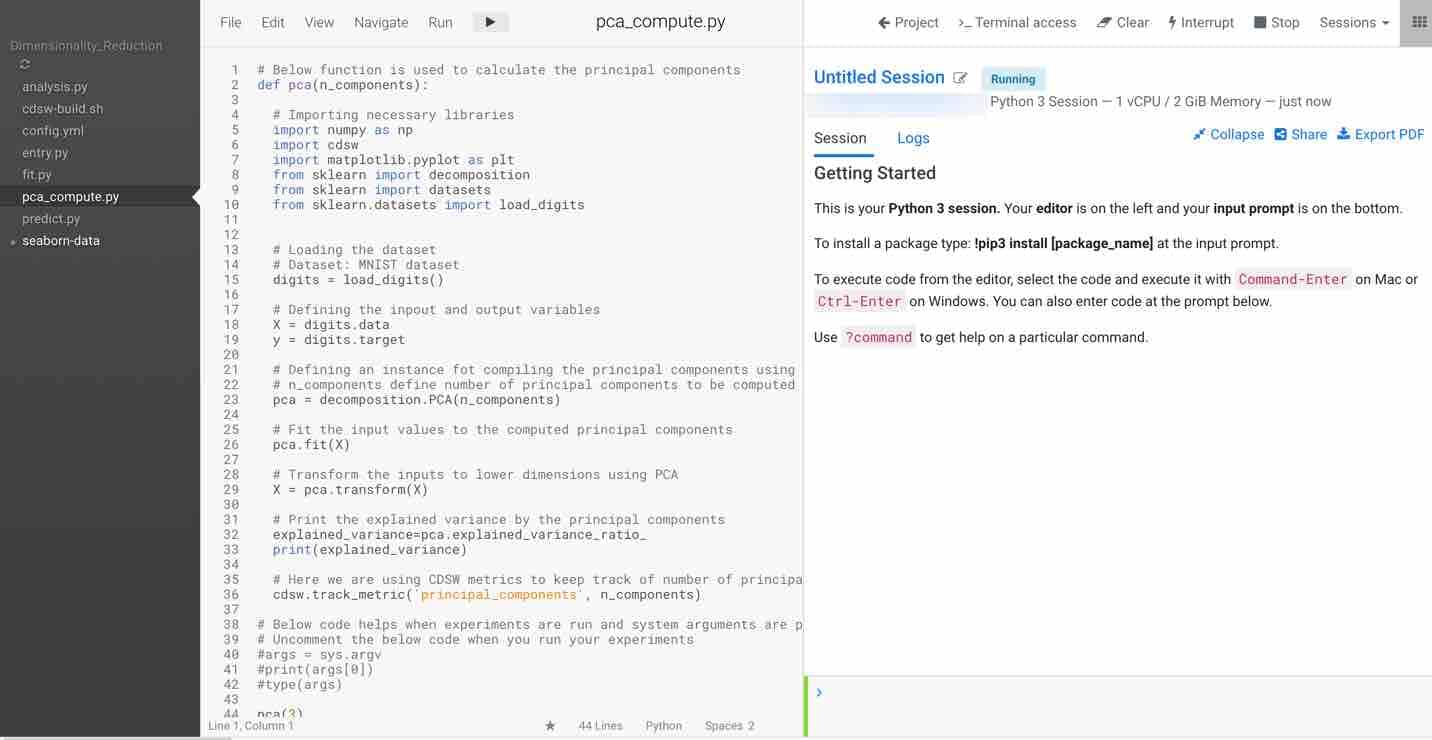 Next, run the code snippet. Your output should look as follows:

As an example, you can run the pca_compute.py script to launch the experiment which accepts n_components as arguments and prints the explained_variance of the principal components. You can initially test your script to avoid any errors during running your experiments. You can also launch a session to simultaneously test code changes on the interactive console as you launch new experiments.

To test the script, launch a Python session and run the following command from the workbench command prompt:

Now to run the experiment click on Run > Run Experiment if you are already on an active session. Fill out the fields: 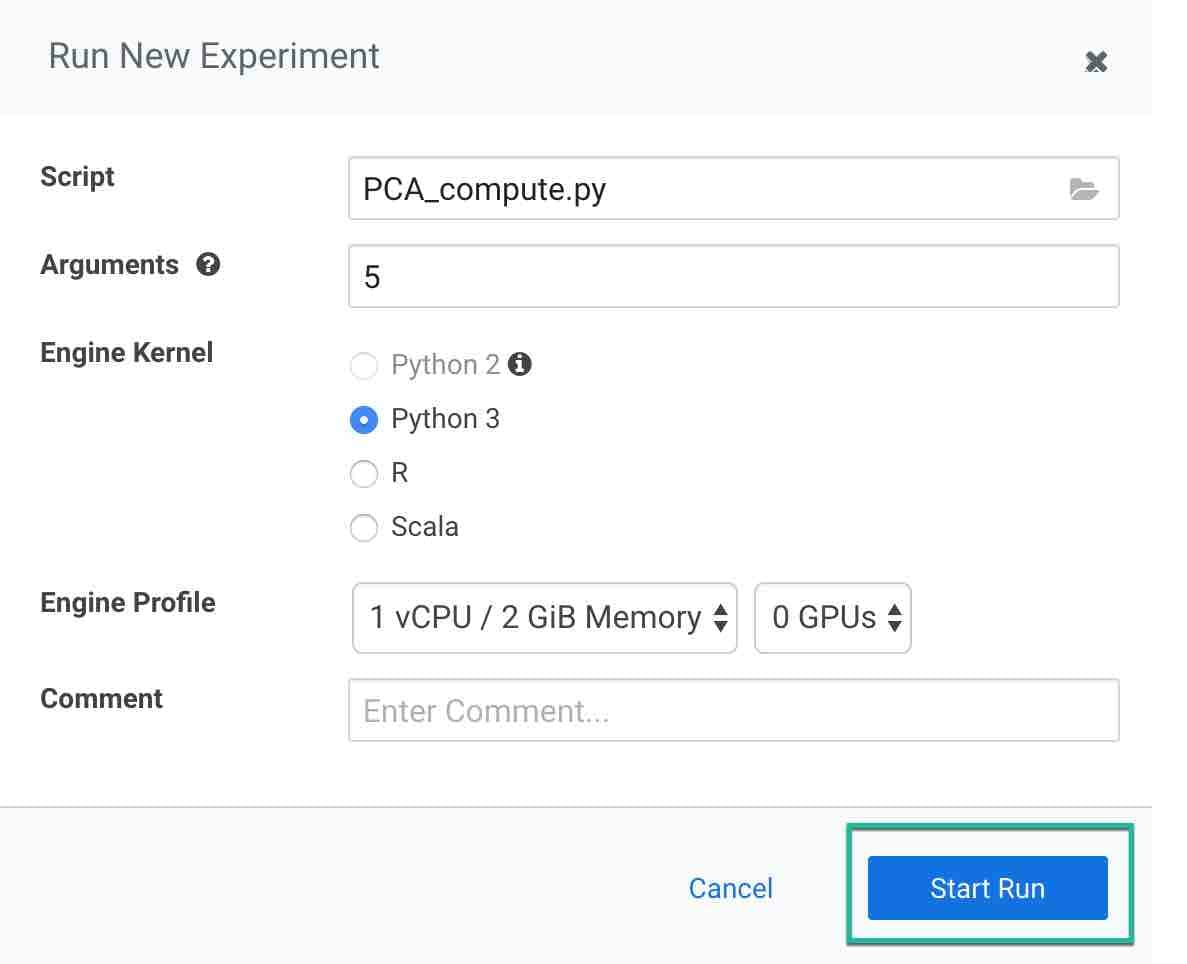 Then click on Start Run to run the experiment and observe the results.

To track progress for the run, go back to the project overview. On the left navigation bar click Experiments. You should see the experiment you've just run at the top of the list. 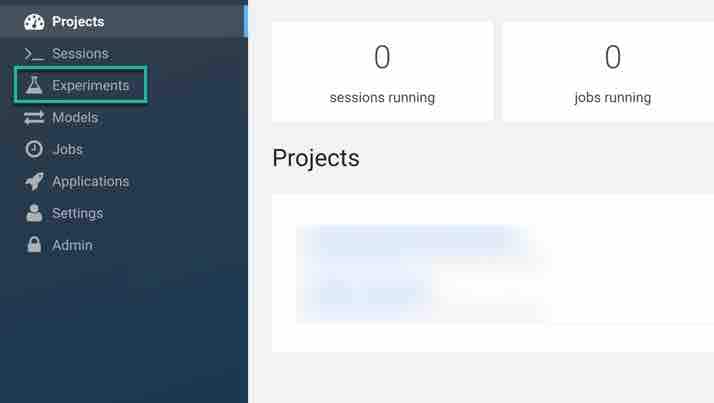 Click on the Run ID to view an overview for each individual run. Then click Build. On this Build tab you can see real time progress as CML builds the Docker image for this experiment. This allows you to debug any errors that might occur during the build stage.

Once the Docker image is ready, the run will begin execution. You can track progress for this stage by going to the Session tab. You can also check for errors in the session to understand the run time errors encountered during the experiment. 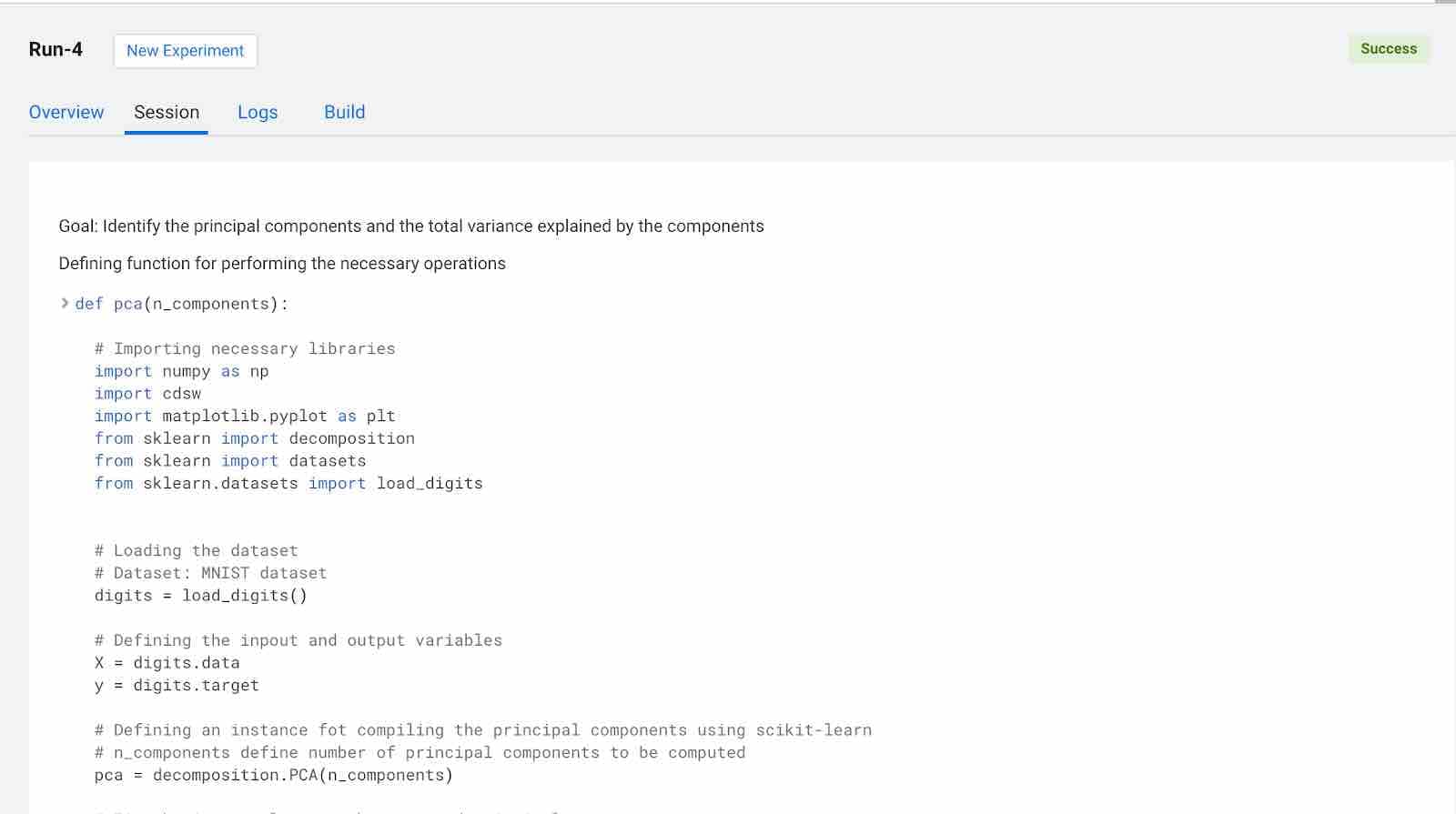 When conducting experiments in real time we are always curious to keep track of metrics useful for tracking the performance of the model.  CML includes some built-in functions that you can use to compare experiments and save any files from your experiments using the CML library.

This section gives information about deploying the model using CML. We are using the same script to deploy the model.

Click New Model and fill out the fields as shown below. Make sure you use the Python 3 kernel. For example, here we are using pca_compute.py script and example input would be the n_components written in JSON format. You have flexibility to choose the engine profile and GPU capability if needed and CML also provides an option to choose replicas for your model which helps in avoiding single point of failure when your models are in production. 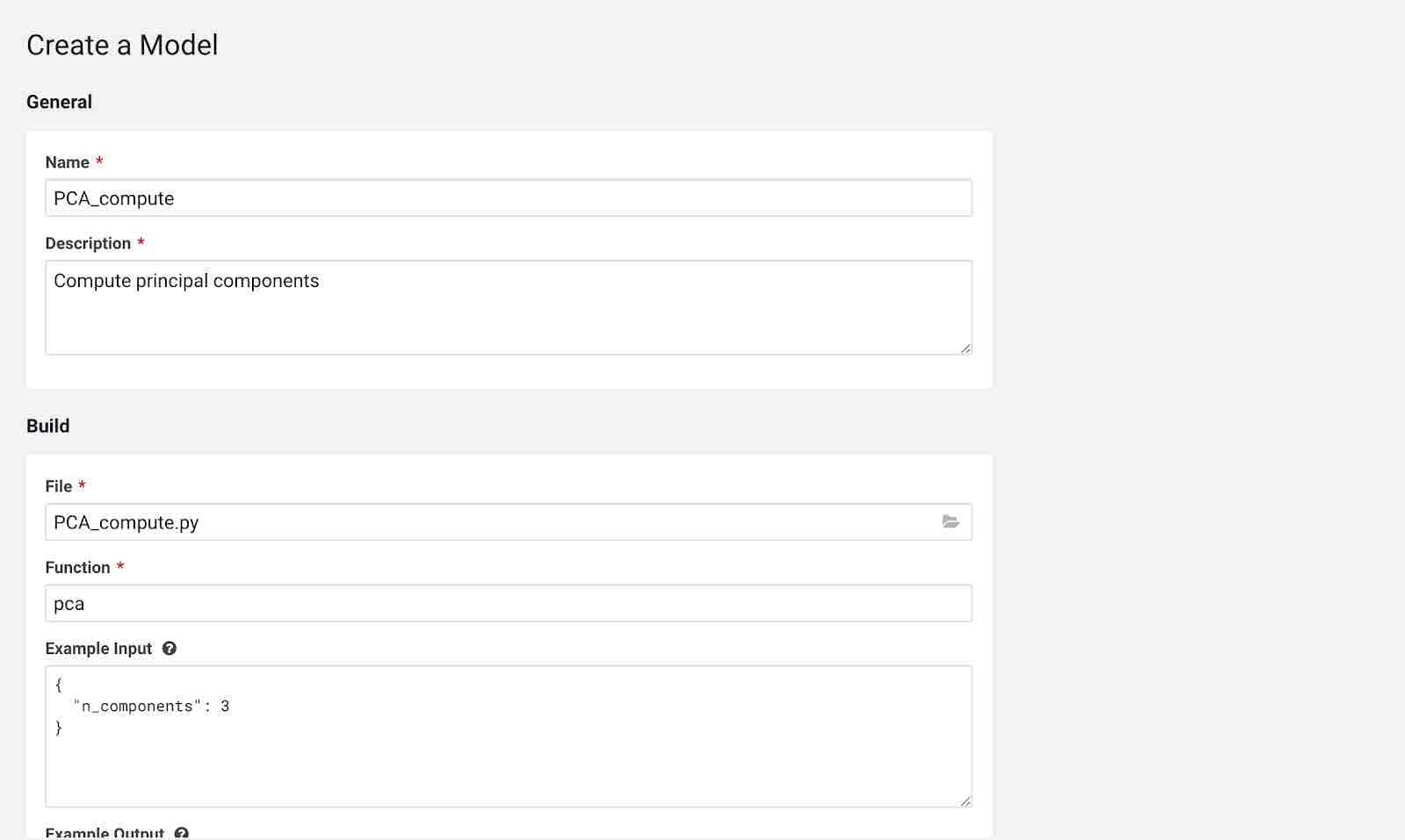 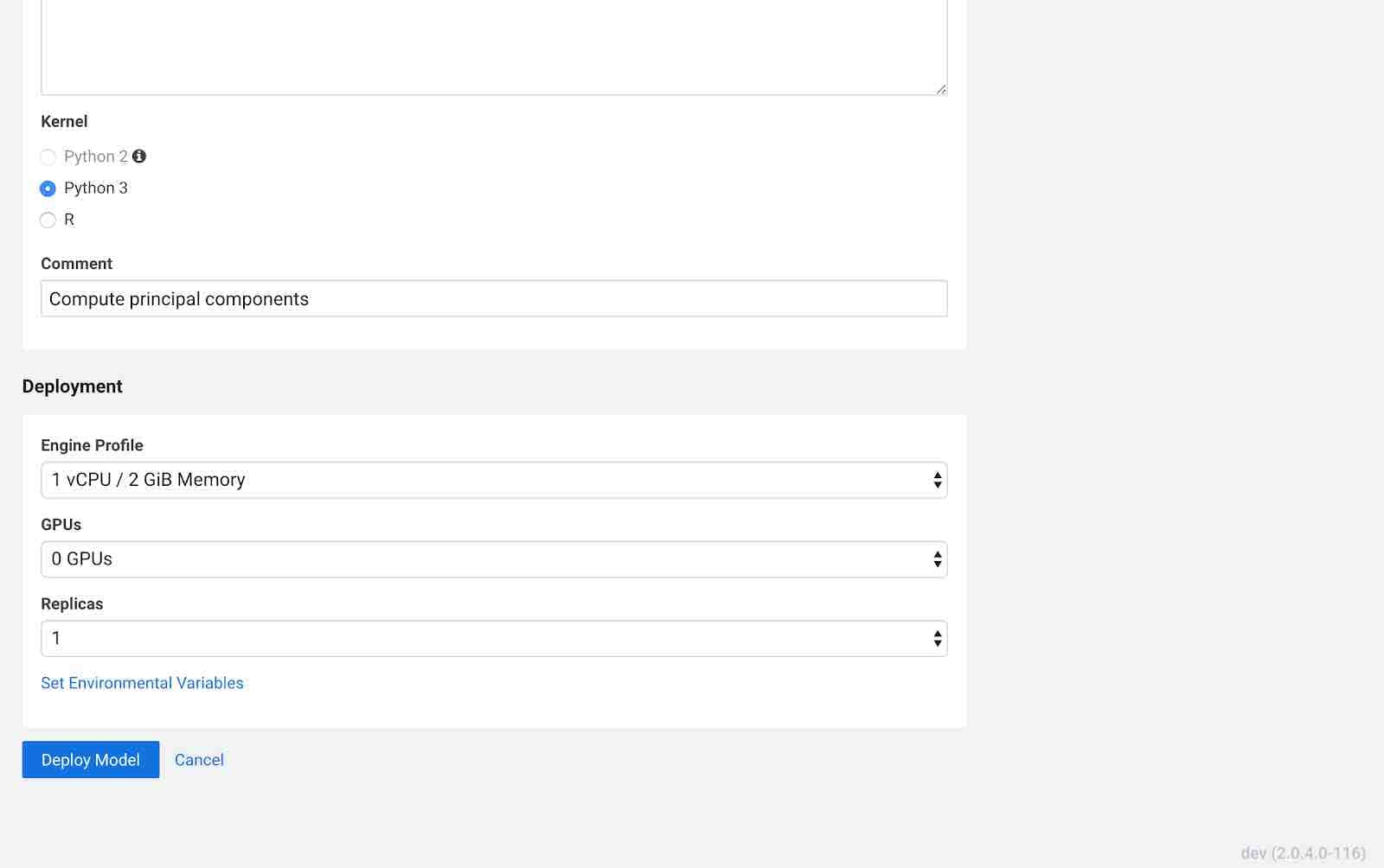 Click Deploy Model. Click on the model to go to its overview page. As the model builds you can track progress on the Build page. Once deployed, you can see the replicas deployed on the Monitoring page.

Check Builds tab to track the progress of the model

When you click on settings, you also have an option to delete your model. 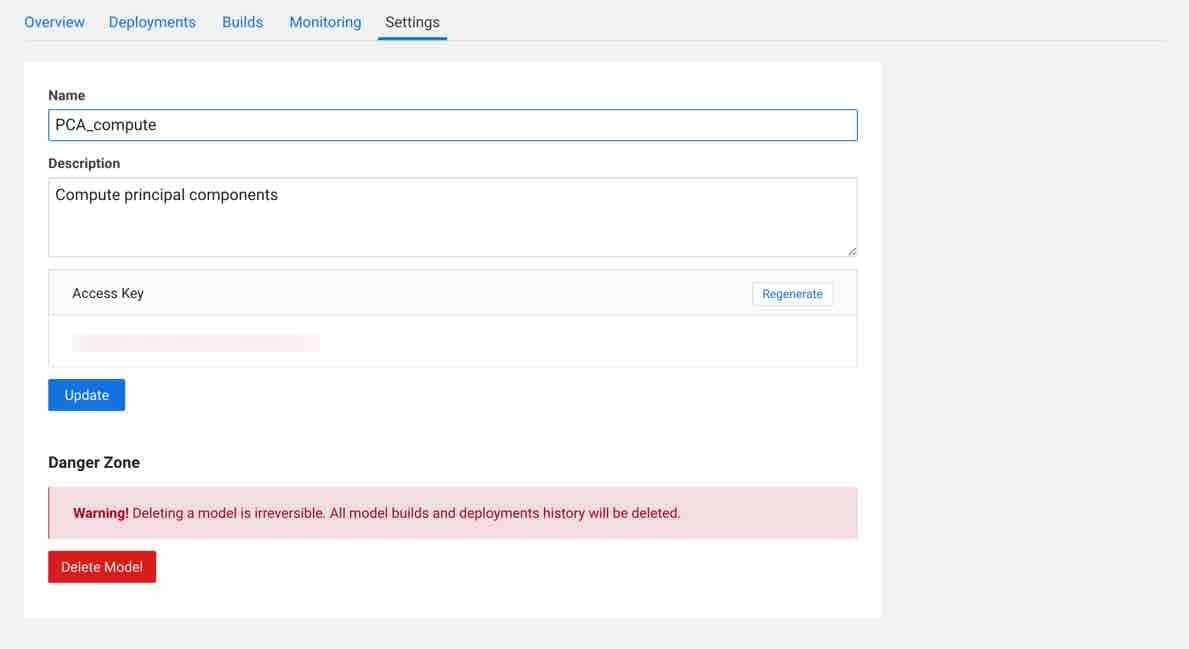 As we have already discussed how PCA, T-SNE, UMAP help in visualizing a dataset. Let us now use the script dimensionality_reduction_viz.py to build the models and visualize the results.

Similar to Section 2, import the code snippet dimensionality_reduction_viz.py into the CML workspace. 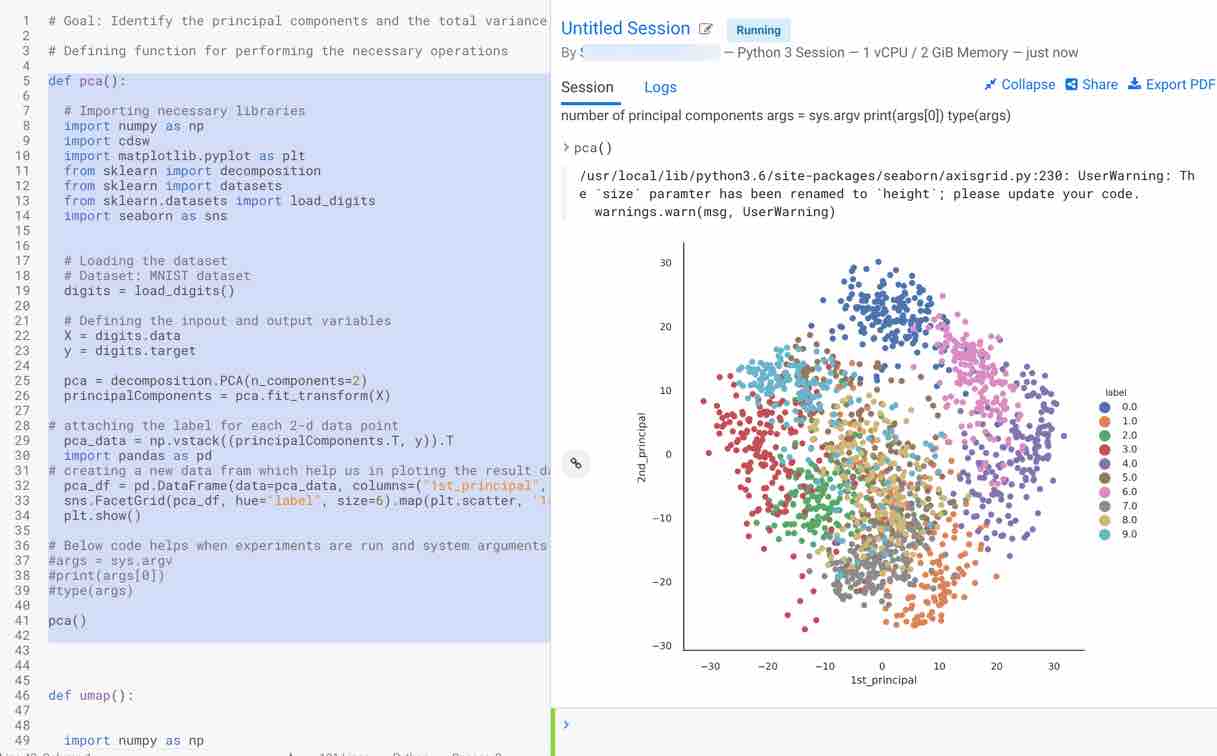 As you can observe, it is more cluttered and the data which is being sent to the algorithm is not linear. Principal components, which are linear combinations of existing features, are not so efficient in interpreting complex polynomial relationships between features due to their linearity. Hence, nonlinear approaches like UMAP and TSNE can be useful in this scenario.

If the relationship between the variables is nonlinear PCA performs poorly. In order to deal with nonlinear data, advanced techniques like TSNE and UMAP (discussed in detail in Section 1) are more useful. Let’s now run the t-SNE function to visualize the two principal components. Steps followed by the function to print the results are as follows: 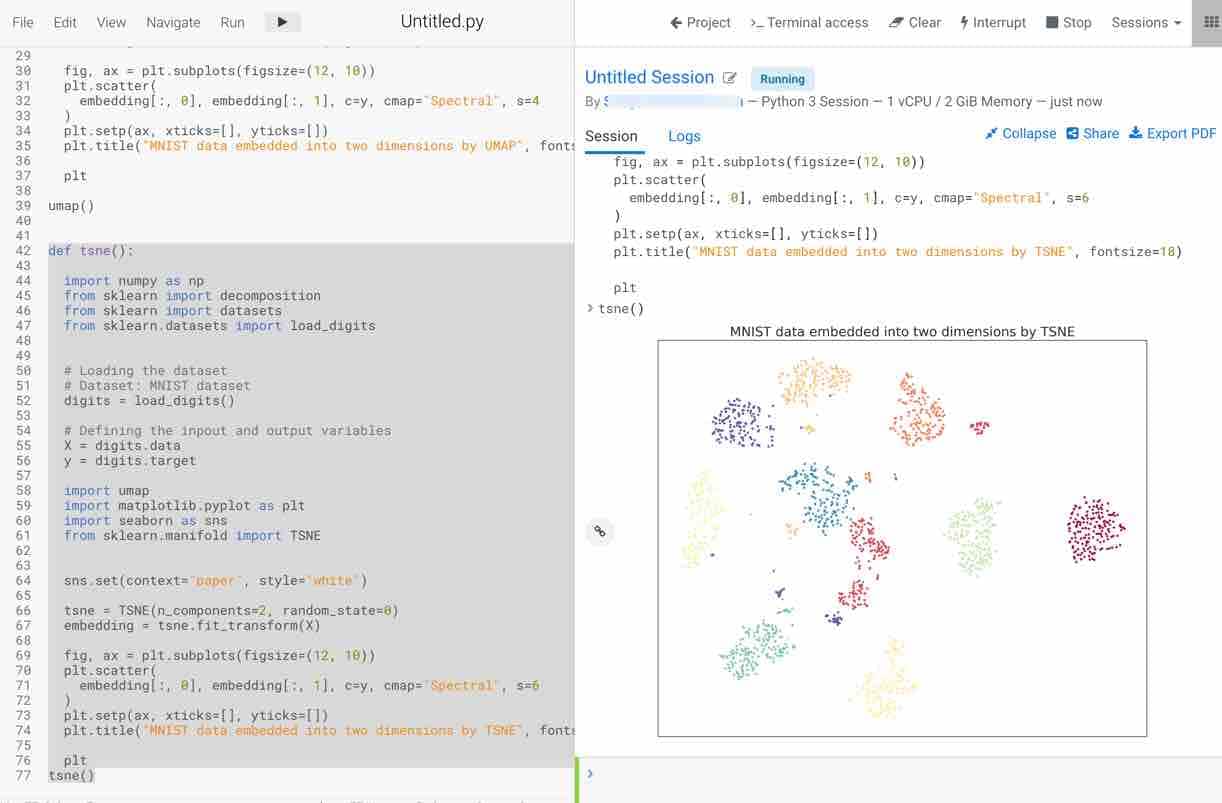 Next, select the umap function to run the code and visualize the result. Steps followed by the function to print the results are as follows 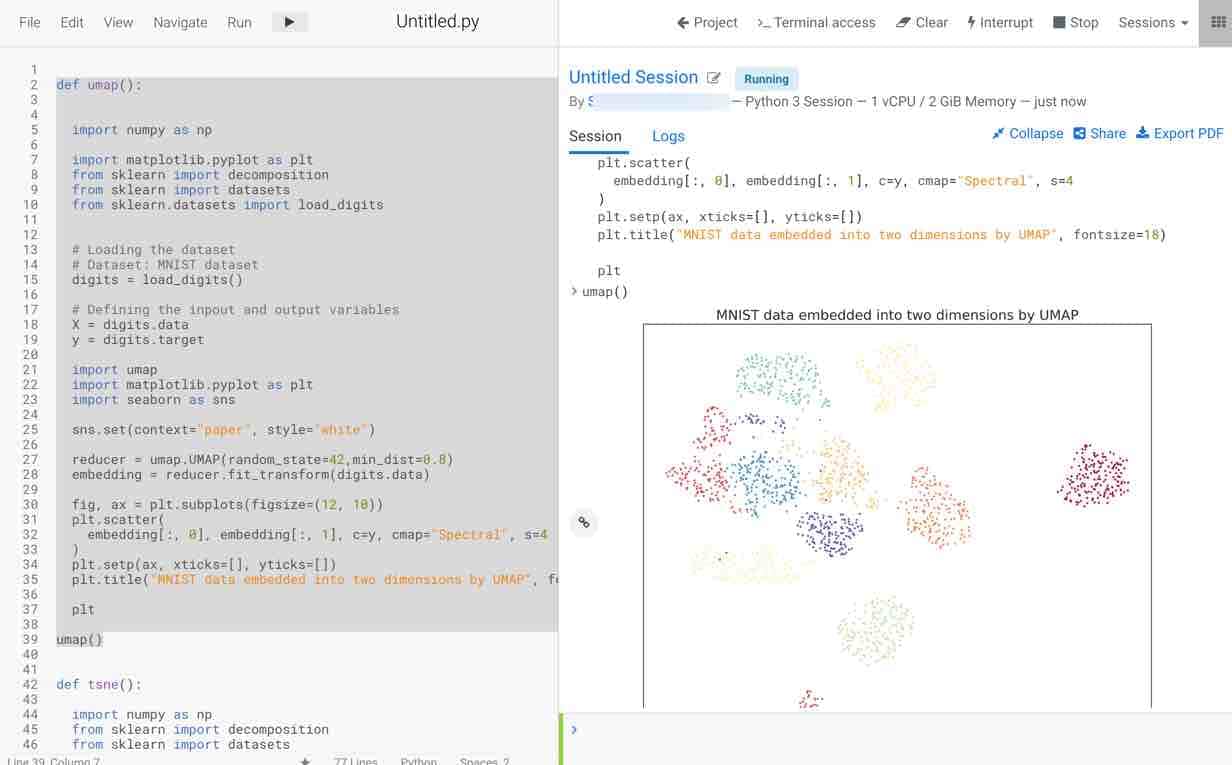 Great Job! You have learned concepts behind dimensionality reduction techniques using Cloudera Machine Learning and how CML can be used for delivering end-to-end machine learning, from model development to model deployment.