Getting Started with CDF Sandbox

In this tutorial, you will learn how to deploy a modern real-time streaming application. This application serves as a reference framework for developing a big data pipeline, complete with a broad range of use cases and powerful reusable core components. You will explore the NiFi Dataflow application, Kafka topics, Schemas and SAM topology.

Stream Analytics Manager is a drag and drop program that enables stream processing developers to build data topologies within minutes compared to traditional practice of writing several lines of code. A topology is a directed acyclic graph (DAG) of processors. Now users can configure and optimize how they want each component or processor to perform computations on the data. They can perform windowing, joining multiple streams together and other data manipulation. SAM currently supports the stream processing engine known as Apache Storm, but it will later support other engines such as Spark and Flink. At that time, it will be the users choice on which stream processing engine they want to choose.

Apache Storm is the current backend computational processing engine for Stream Analytics Manager. After the user builds their SAM topology, all the actual processing of data happens in a Storm topology, which is also a DAG, but is comprised of spouts and bolts with streams of tuples representing the edges.

A spout ingests the data usually from a Kafka Topic into the topology while bolts do all the processing. Thus, all the same components from the SAM topology are represented in the Storm topology, but as appropriate spouts and bolts.

Apache Kafka is an open source publish-subscribe based messaging system responsible for transferring data from one application to another.

The Trucking IoT data comes from a truck events simulator that is ingested by Apache NiFi, NiFi sends the data to Kafka topics which are then ingested by Stream Analytics Manager (SAM). A more in depth explanation of the pipeline will be explained as you explore the NiFi Dataflow application, Schema Registry and SAM.

2. The NiFi Dataflow application template: Trucking IoT Demo will appear on the canvas.

6. In the "Enable Controller Service" window, under "Scope", select "Service and referencing components". Then click ENABLE. 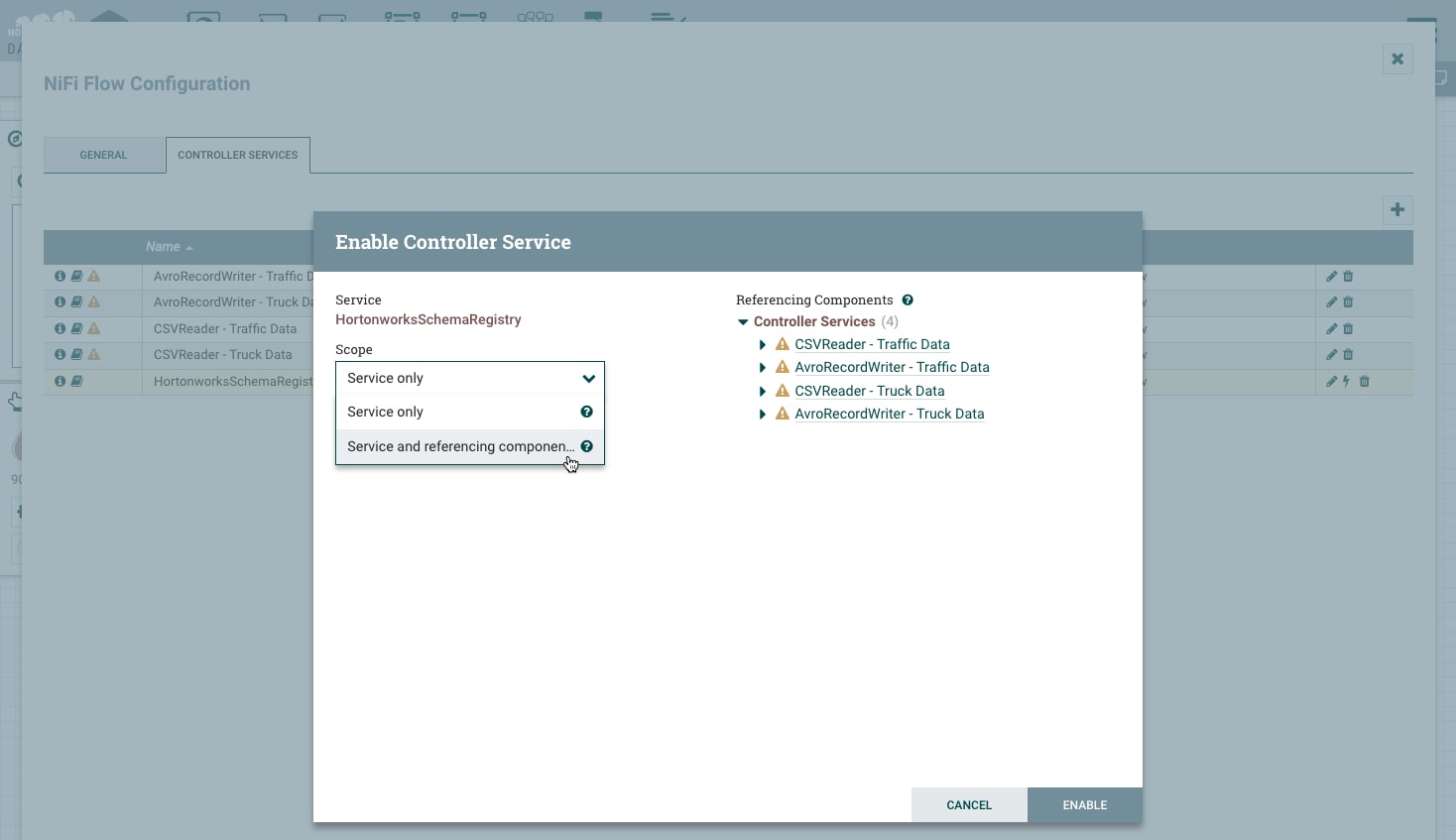 All controller services referencing HortonworksSchemaRegistry will also be enabled. Head back to the NiFi Dataflow.

Overview of the 7 processors in the NiFi Flow:

Overview of 5 controller services used in the NiFi Flow:

7. Press command+A or control+A to select all the processors in the NiFi Dataflow and click on the start button 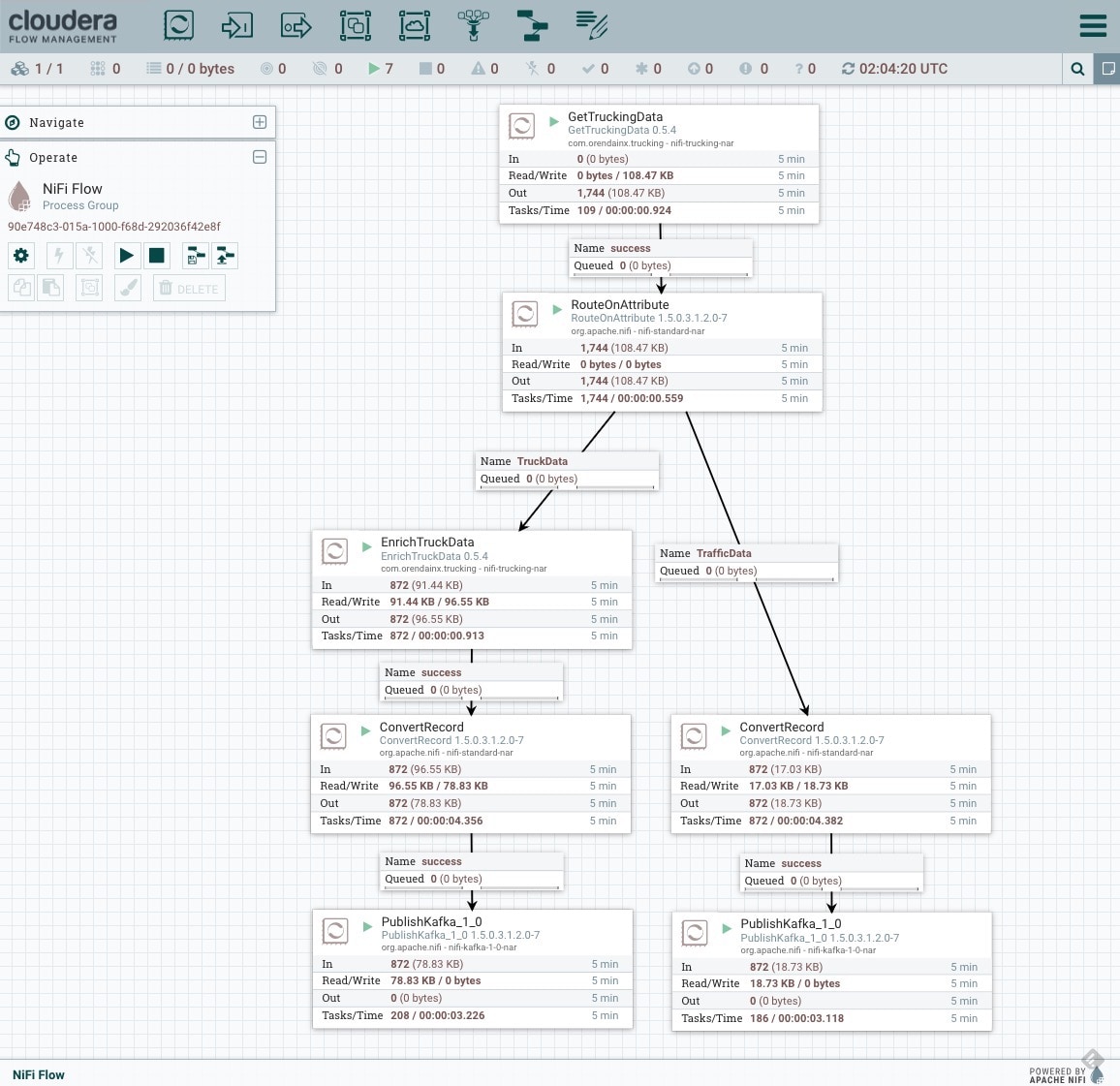 8. To reduce resource consumption and footprint, when the PublishKafka_1_0 processors reach about 500 input records, click on the stop button

. This will take approximately 1 - 2 minutes. 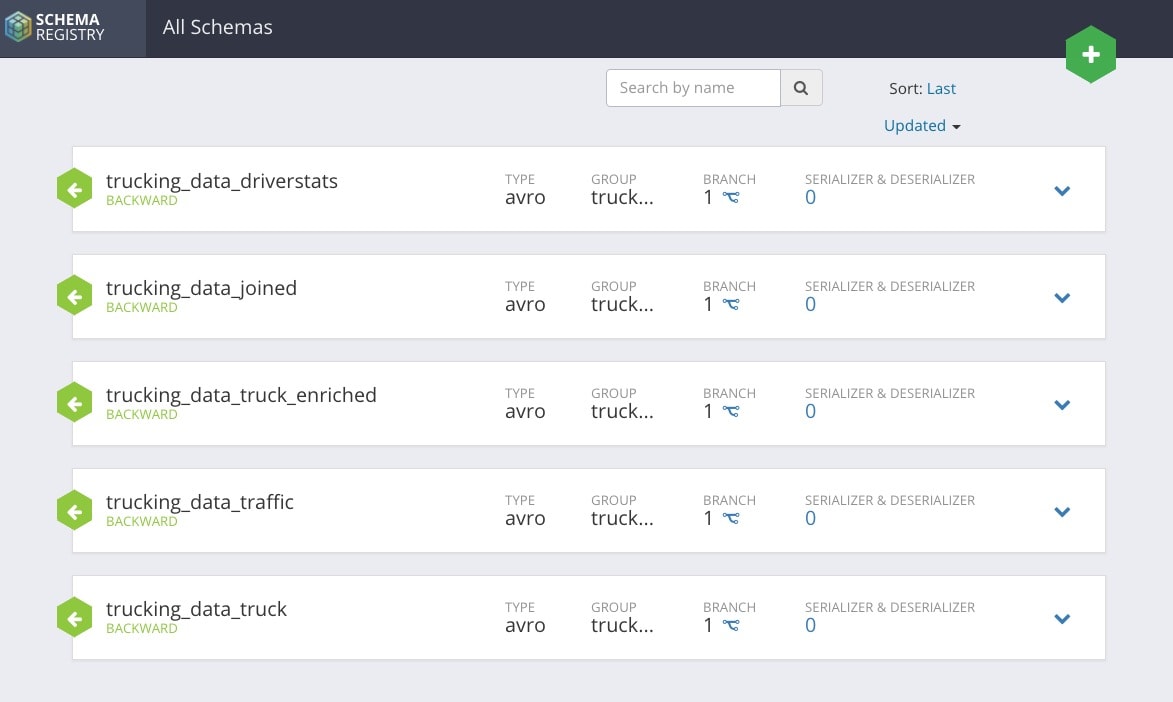 Overview of the essential schemas in the Schema Registry:

2. Click on the Trucking-IoT_Demo, then the green pencil on the right top corner. This should show an image similar to the one below, click on the Run button to deploy the topology: 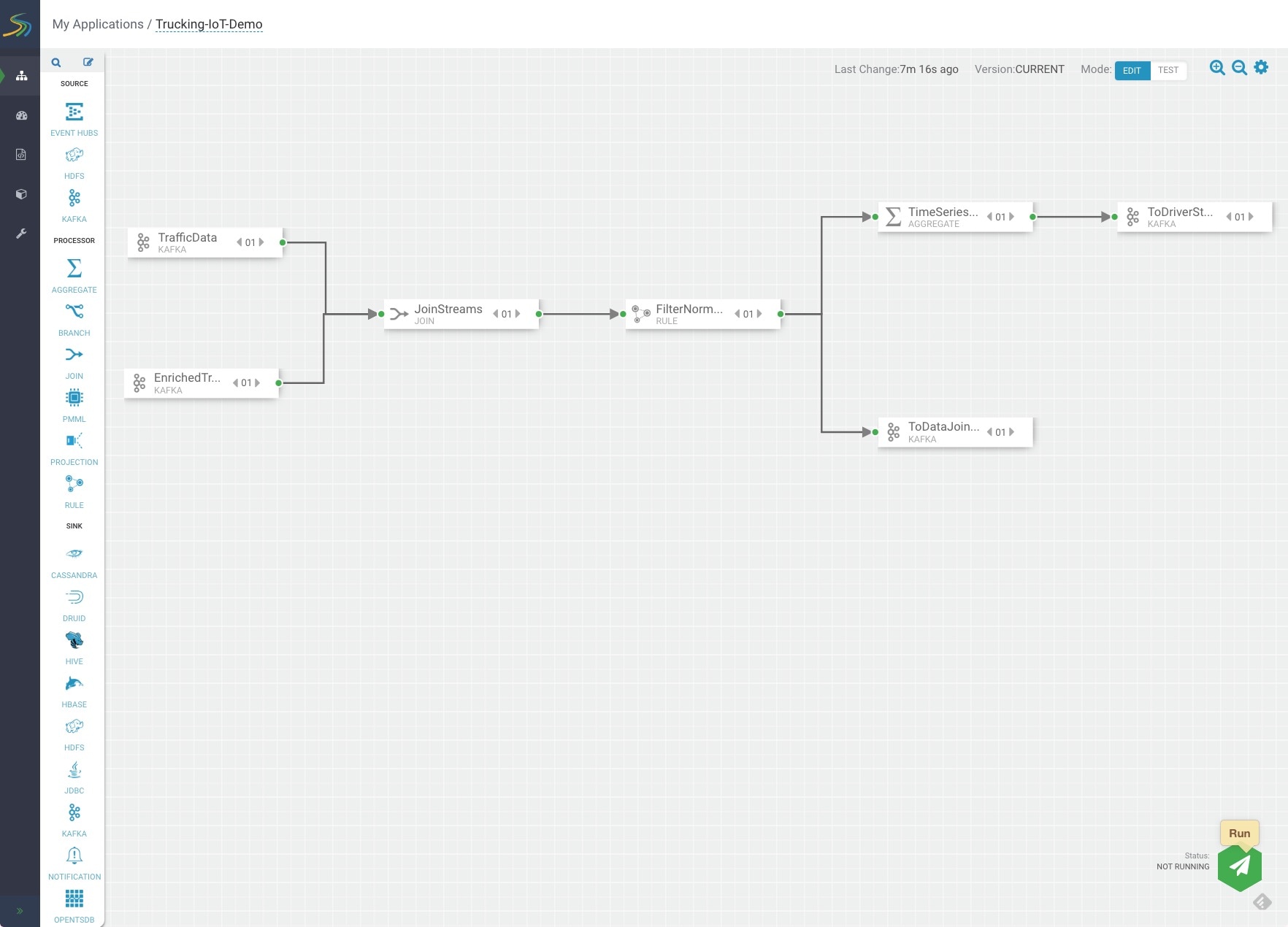 A window will appear asking if you want to continue deployment, click Ok.

3. You will receive a notification that the SAM topology application deployed successfully and your topology will show Active Status in the bottom right corner.

Overview of the SAM Canvas: 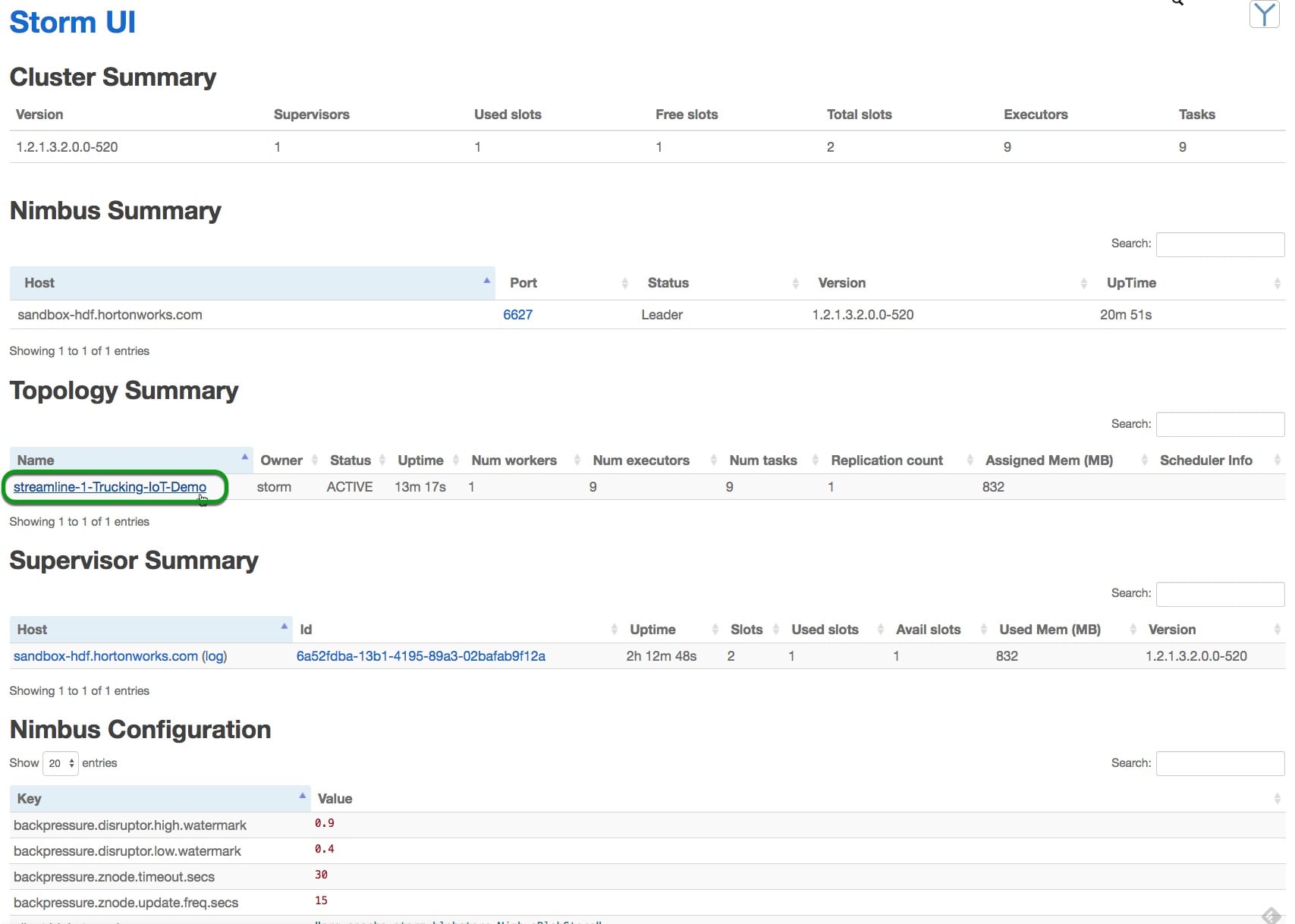 3. Overview of the Storm Topology 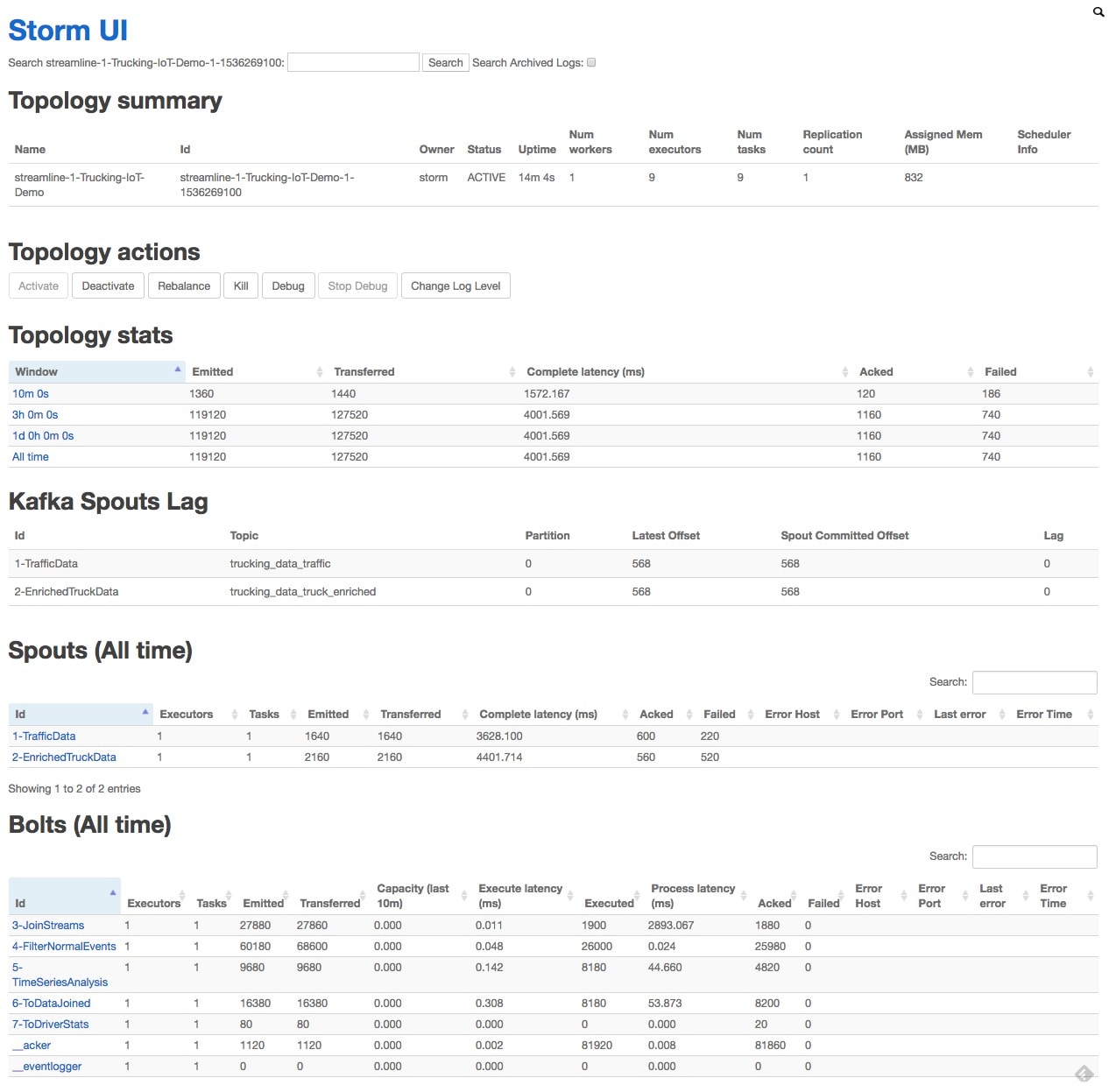 You can see the total number of Emitted (1360) and Transferred (1440) tuples after 10m 0s under TOPOLOGY STATS for the entire topology. You can also see individual emitted and transferred tuples for each individual Spout and Bolt in the topology increase. If we hover over one of the spouts or bolts on the graph, we can see how much data they process and their latency.

Congratulations! You deployed the Trucking IoT demo that processes truck event data by using the NiFi data flow application to separate the data into two flows: TruckData and TrafficData. These two flows are then transmitted into two Kafka robust queues tagged with Schema Registry schemas: trucking_data_traffic and _trucking_data_truck_enriched. Stream Analytics Manager's (SAM) topology pulls in this data to join the two streams (or flows) by routId, and filter's non-normal events which then get split into two streams. One stream is sent to a Kafka sink directly the other stream is then further filtered with an aggregate processor then sent to a different Kafka sink.