How to Process Data with Apache Pig

In this tutorial, we will learn to store data files using Ambari HDFS Files View. We will implement pig latin scripts to process, analyze and manipulate data files of truck drivers statistics. Let's build our own Pig Latin Scripts now.

Pig is a high level scripting language that is used with Apache Hadoop. Pig excels at describing data analysis problems as data flows. Pig is complete in that you can do all the required data manipulations in Apache Hadoop with Pig. In addition through the User Defined Functions(UDF) facility in Pig you can have Pig invoke code in many languages like JRuby, Jython and Java. Conversely you can execute Pig scripts in other languages. The result is that you can use Pig as a component to build larger and more complex applications that tackle real business problems.

A good example of a Pig application is the ETL transaction model that describes how a process will extract data from a source, transform it according to a rule set and then load it into a datastore. Pig can ingest data from files, streams or other sources using the User Defined Functions(UDF). Once it has the data it can perform select, iteration, and other transforms over the data. Again the UDF feature allows passing the data to more complex algorithms for the transform. Finally Pig can store the results into the Hadoop Data File System.

Pig scripts are translated into a series of MapReduce jobs that are run on the Apache Hadoop cluster. As part of the translation the Pig interpreter does perform optimizations to speed execution on Apache Hadoop. We are going to write a Pig script that will do our data analysis task.

Tez – Hindi for “speed” provides a general-purpose, highly customizable framework that creates simplifies data-processing tasks across both small scale (low-latency) and large-scale (high throughput) workloads in Hadoop. It generalizes the MapReduce paradigm to a more powerful framework by providing the ability to execute a complex DAG (directed acyclic graph) of tasks for a single job so that projects in the Apache Hadoop ecosystem such as Apache Hive, Apache Pig and Cascading can meet requirements for human-interactive response times and extreme throughput at petabyte scale (clearly MapReduce has been a key driver in achieving this).

Download the driver data file from here. Once you have the file you will need to unzip the file into a directory. We will be uploading two csv files - drivers.csv and timesheet.csv.

Navigate to /user/maria_dev and click on the Upload button to select the files we want to upload into the Hortonworks Sandbox environment.

Click on the browse button to open a dialog box. Navigate to where you stored the drivers.csv file on your local disk and select drivers.csv and click Open. Do the same thing for timesheet.csv. When you are done you will see there are two new files in your directory.

Now that we have our data files, we can start writing our Pig script.

The default Username/Password is root/hadoop, you will be asked to reset your password the first time you sign on. 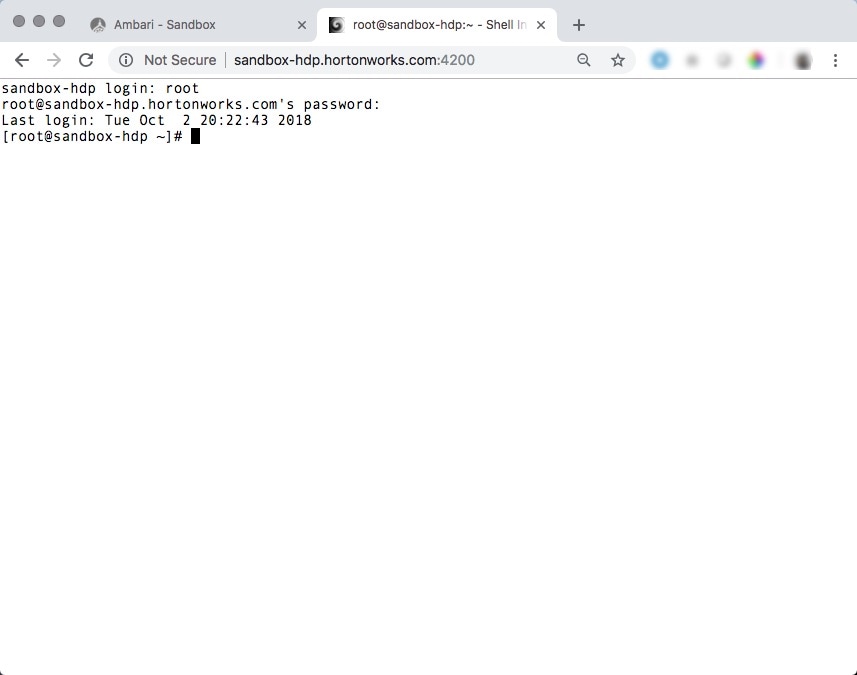 Once in the shell switched users to maria_dev and change directories to home:

In this tutorial we will explore Grunt shell which is used to write Pig Latin scripts. There are 3 execute modes of accessing Grunt shell:

Default is mapreduce, so if you just type pig, it will use mapreduce as the execution mode. 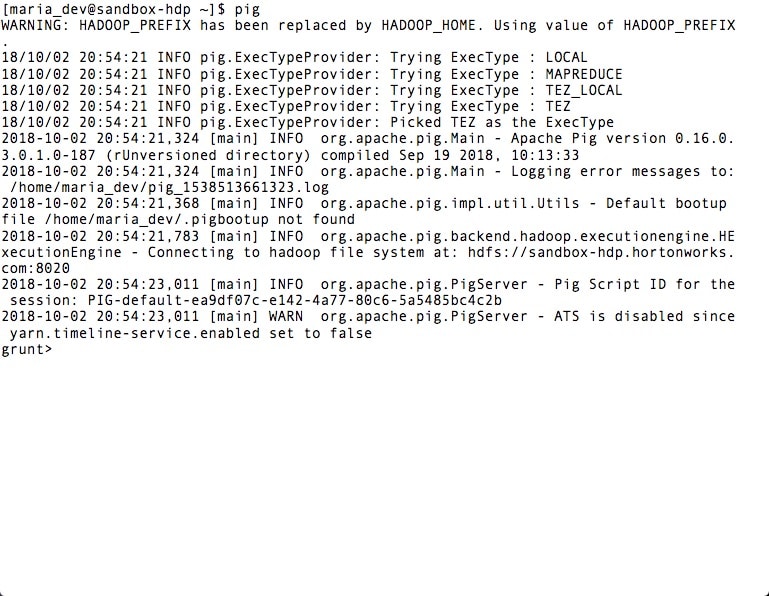 Explore this link to explore more about the grunt shell.

To get started exit out of grunt and create a new file named sum_of_hours_miles then use VI to edit it:

The first thing we need to do is load the data. We use the load statement for this. The PigStorage function is what does the loading and we pass it a comma as the data delimiter. Our code is:

Note: To enter insert mode in VI press i and to exit press esc and :x to save. You may also exit without saving by pressing :q!

Create a Script to Filter Out Data

To filter out the first row of the data we have to add this line:

Implement a Script to Name the Fields

The next thing we want to do is name the fields. We will use a FOREACH statement to iterate through the raw_drivers data object.

So the FOREACH statement will iterate through the raw_drivers data object and GENERATE pulls out selected fields and assigns them names. The new data object we are creating is then named driver_details. Our code will now be:

Perform these operations for timesheet data as well

Load the timesheet data and then filter out the first row of the data to remove column headings and then use FOREACH statement to iterate each row and GENERATE to pull out selected fields and assign them names.

The next line of code is a GROUP statement that groups the elements in timesheet_logged by the driverId field. So the grp_logged object will then be indexed by driverId. In the next statement as we iterate through grp_logged we will go through driverId by driverId. Type in the code:

In the next FOREACH statement, we are going to find the sum of hours and miles logged by each driver. The code for this is:

Now that we have the sum of hours and miles logged, we need to join this with the driver_details data object so we can pick up the name of the driver. The result will be a dataset with driverId, name, hours logged and miles logged. At the end we DUMP the data to the output.

Let’s take a look at our script. The first thing to notice is we never really address single rows of data to the left of the equals sign and on the right we just describe what we want to do for each row. We just assume things are applied to all the rows. We also have powerful operators like GROUP and JOIN to sort rows by a key and to build new data objects.

Save and Execute The Script

At this point we can save our script. Let's execute our code by exiting and saving on VI press esc then type :x

Next submit the Pig job:

Note: -x mr sets the execution engine to be MapReduce.

As the jobs are run we will get status boxes where we will see logs, error message, the output of our script and our code at the bottom. 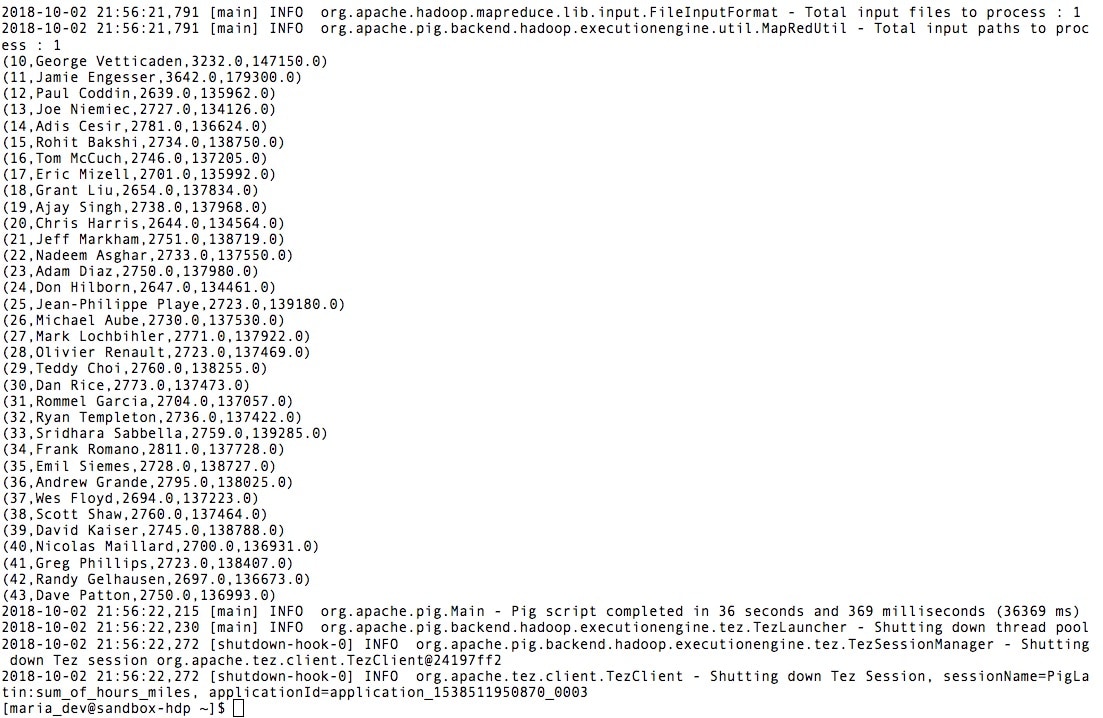 If you scroll up to the program output you can see the log file of your jobs. We should always check the Logs to check if your script was executed correctly. 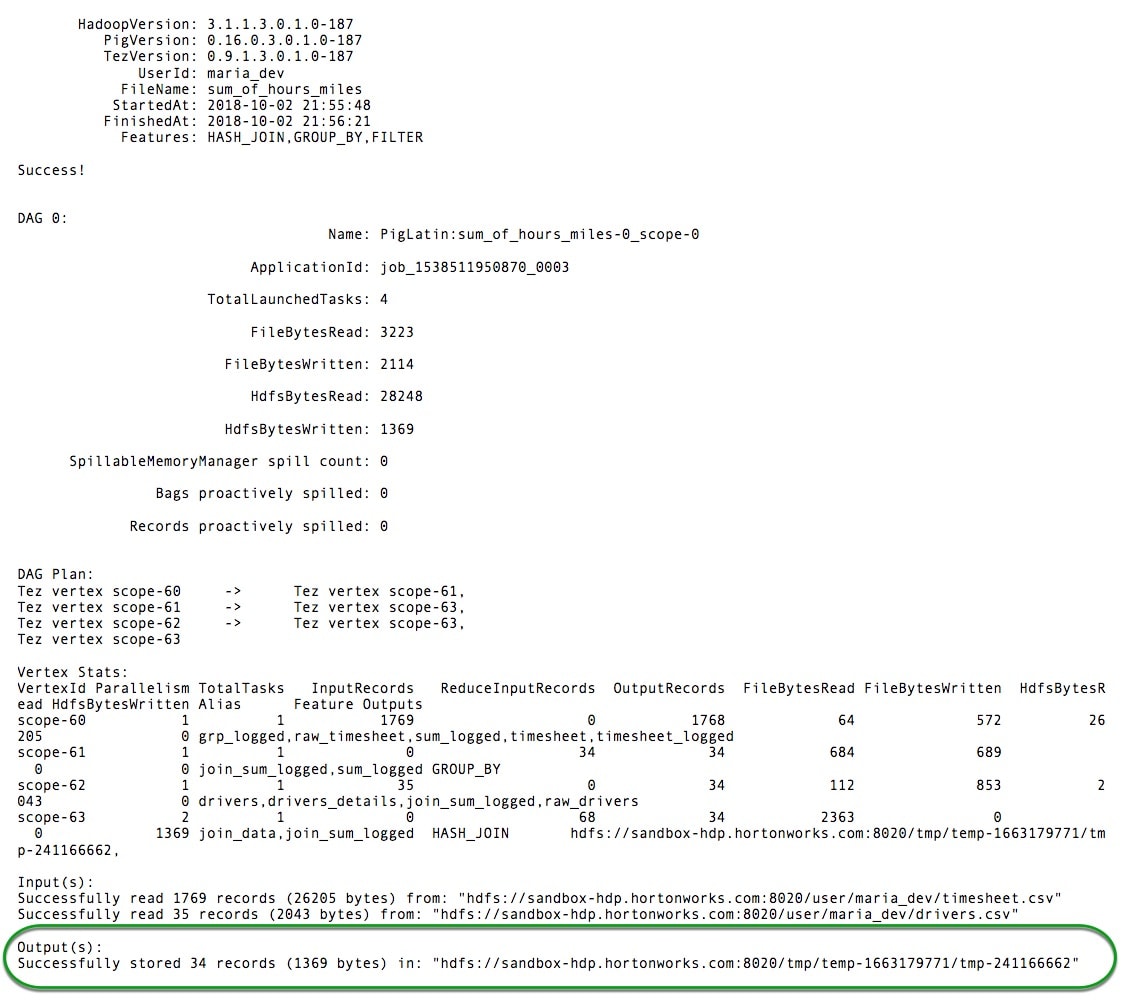 So we have created a simple Pig script that reads in some comma separated data. Once we have that set of records in Pig we pull out the driverId, hours logged and miles logged fields from each row. We then group them by driverId with one statement, GROUP. Then we find the sum of hours and miles logged for each driverId. This is finally mapped to the driver name by joining two datasets and we produce our final dataset.

As mentioned before Pig operates on data flows. We consider each group of rows together and we specify how we operate on them as a group. As the datasets get larger and/or add fields our Pig script will remain pretty much the same because it is concentrating on how we want to manipulate the data.

Let’s run the same Pig script with Tez by clicking on Execute on Tez by resubmitting the Pig Job and indicating the execution enginge to be Tez:

Notice that Tez is significantly faster than MapReduce.

On our machine it took around 33 seconds with Pig using the Tez engine. That is nearly 3X faster than Pig using MapReduce even without any specific optimization in the script for Tez. Tez definitely lives up to it’s name.