This tutorial will explain the current Hortonworks Sandbox architecture, starting in HDP 2.6.5 a new Sandbox structure is introduced making it possible to instantiate two single node clusters (i.e. HDP and HDF) within a single Sandbox with the purpose of combining the best features of the Data-At-Rest and Data-In-Motion methodologies in a single environment. Have a look at the graphical representation of the Sandbox below, it shows where the Sandbox exists in relation to the outside world, the instance depicted is of the Connected Data Architecture (CDA) if you are not yet familiarized with the concept of CDA do not worry, we will review it at a later section. 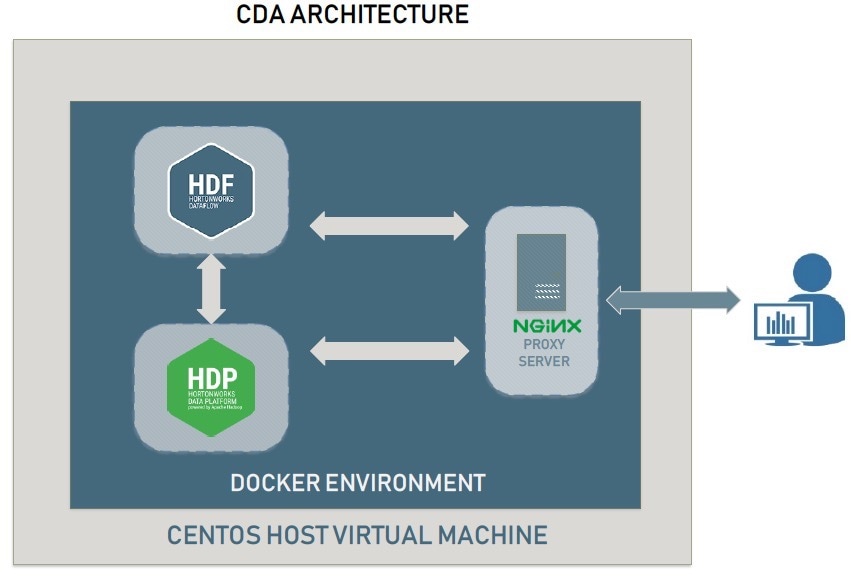 At a high level the Sandbox is a Linux (CentOS 7) Virtual Machine leveraging docker to host different Sandbox distributions, namely HDP or HDF. In order to orchestrate communication between the outside world and the Sandbox a reverse proxy server NGINX is containerized and configured to only open the ports needed to the outside enabling us to granularly interact with each container. 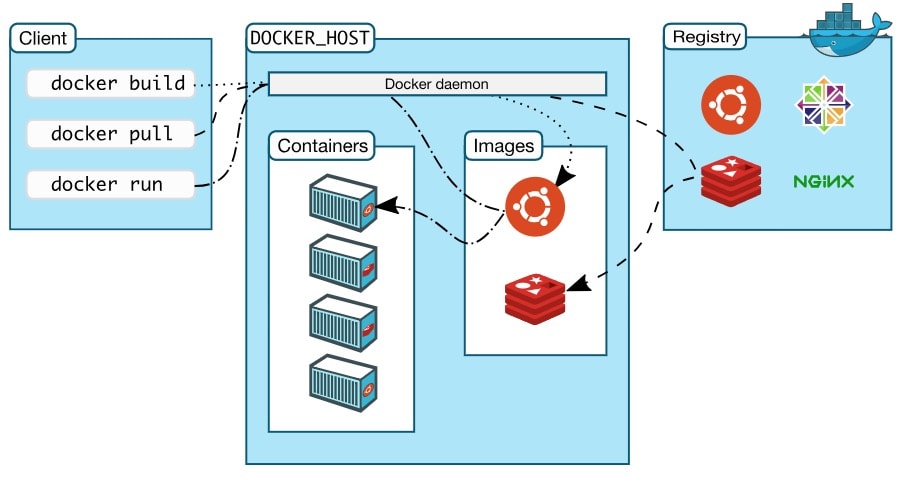 In the Docker architecture above, Docker registry are services used for storing Docker images, such as Docker Hub. Docker Host is the computer Docker runs on. Diving deeper into the host, you can see the Docker Daemon, which is used to create and manage Docker objects, such as images, containers, networks and volumes. The user or client is able to interact with Docker daemon via Client Docker's Command Line Interface (CLI). The Docker daemon is a long-running program also known as a server, and the CLI utilizes Docker’s REST API to interact with the Docker daemon. As you can observe, the Docker Engine is a client-server application comprised of Client Docker CLI, REST API and Docker daemon.

Why a Reverse Proxy Server is Needed

One of the biggest obstacles to overcome with this architecture is keeping ports consistent and reduce conflicts as much as possible between containers; for example, we wanted to keep Ambari UI as port 8080 across any Sandbox. The best solution is to keep the default ports as they are but distinguish the back-end server by domain name, this is why in this build we must change the host's name from:

This allows us to maintain consistency across different Sandboxes and avoid conflicts, so when CDA is deployed we may reach Ambari UI at:

In this example Ambari UI is reachable for different Sandboxes at the same time by specifying the domain name of the Sandbox we are trying to reach:

Cool stuff right? Now let's take a look at where out containers are in relation to our virtual environment.

If you would like to visualize the running Sandbox container and proxy you you must log on to the host, you may chose to follow along; however, this is not necessary.

If you are using VMWare or VirtualBox you may log on to both the Sandbox or the host, here is a complete list of the TCP open ports for SSH services:

If you are running the VirtualBox VM:

Or if you are using VMWare:

Now that you are in the Virtual Machine hosting the containers we can see what Docker images are ready for deployment: 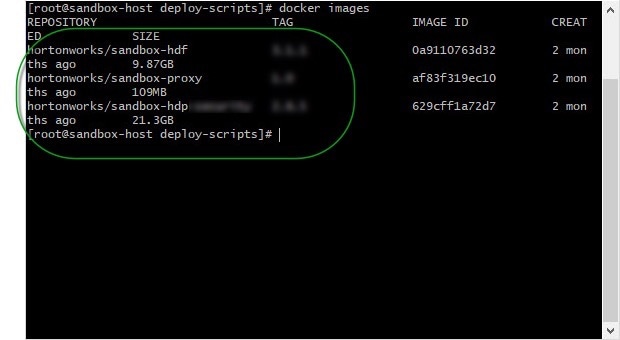 Furthermore, we can see what containers are currently running by using the following command:

If you started out with HDP you will see two containers running, the first is the NGINX proxy container followed by a list of open ports and where they are being forwarded. Since HDP was used as a base in this example we can see that it is listed as a running container.

here is some context on the information displayed:

When CDA has been deployed both HDP and HDF are displayed as running containers:

Data-In-Motion is the idea where data is being ingested from all sorts of different devices into a flow or stream. While the data is moving throughout this flow, components or as NiFi calls them “processors” are performing actions on the data to modify, transform, aggregate and route it. Data-In-Motion covers a lot of the preprocessing stage in building a Big Data Application. For instance, data preprocessing is where Data Engineers work with the raw data to format it into a better schema, so Data Scientists can focus on analyzing and visualizing the data.

Data-At-Rest is the idea where data is not moving and is stored in a database or robust datastore across a distributed data storage such as Hadoop Distributed File System (HDFS). Instead of sending the data to the queries, the queries are being sent to the data to find meaningful insights. At this stage data, data processing and analysis occurs in building a Big Data Application.

Hortonworks Connected Data Architecture (CDA) is composed of both Cloudera DataFlow (CDF) and Hortonworks DataPlatform (HDP) sandboxes and allows you to play with both data-in-motion and data-at-rest frameworks simultaneously. 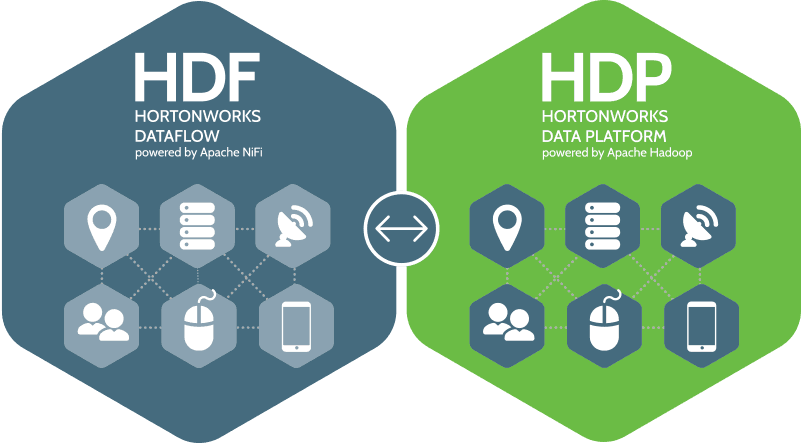 As data is coming in from the edge, it is collected, curated and analyzed in real-time, on premise or in the cloud using the HDF framework. Once the data has been captured you can convert the your Data-In-Motion into Data-At-Rest with the HDP framework to gain further insights.

How CDA is made possible in the sandbox

In order for HDF to send data into HDP, both sandboxes need to be set up to communicate with each other. If you would like to know more about the deployment of CDA check out the Sandbox Deployment and Install Guide under the Advanced Topic section. When CDA is enabled a script internal to the Sandbox takes into account what base you started with and calls on the Docker daemon to instantiate the image of the complementing Sandbox flavour (e.g. HDP installs HDF, and HDF installs HDP).

In the image below we used HDP as our base and launched the initialization script for CDA. As you can see all the needed components for HDF are being loaded into a new container: 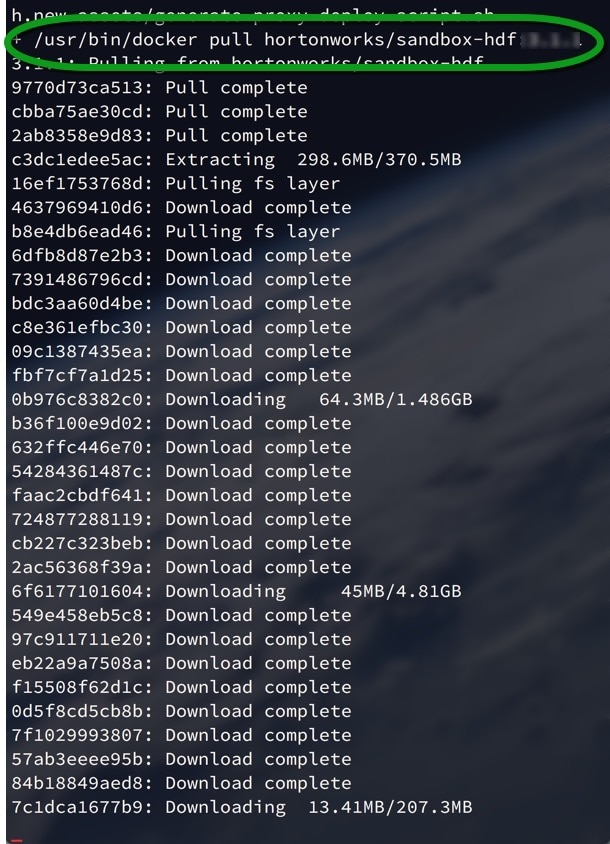 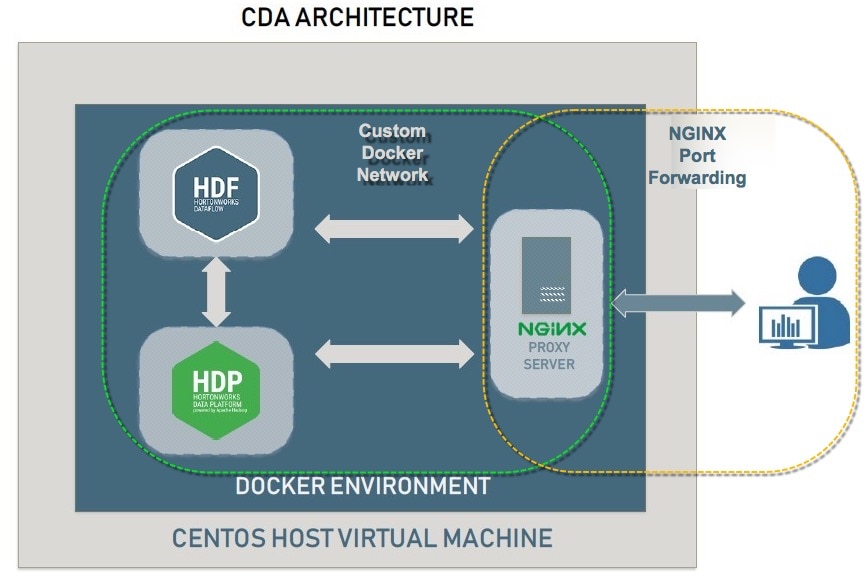 Congratulations, you have learned a great deal about the structure of our Sandbox, and how HDP and HDF single node clusters are implemented. Additionally, you have learned what CDA is and how it can be used to capture insights from both Data-At-Rest and Data-In-Motion. Additionally, you have learned about the inter-container communication made possible by Docker's internal network and communication with the outside world done via NGINX. Now that you know the internal workings of CDA on the Sandbox, bring your understanding to practice with these great CDA ready tutorials: