To understand the importance of Data Visualization, began brainstorming on the some visualizations you can use to communicate messages about the trucking data and become familiar with the Superset.

What is Data Visualization?

Many people view it as an art and science, which is has various applications:

Why use Data Visualization?

We should use data visualization rather than representing the data as numbers because humans are more adept at interpreting the relationship in the data when they see it directly as a graph.

Data visualization helps our brain perceive data. According to Physicist Tor Norretrander, eye sight takes up majority of space from the bandwidth of our senses and can process information at the speed of computer networks or ethernet cables illustrated by the following diagram (Udacity Course - Data Visualization with Tableau, Lesson 1: Data Visualization Fundamentals).

Statistician Francis Anscombe setup the scenario in which he had 4 datasets with eleven points (x,y) that had the same descriptive statistics: mean, variance, correlation coefficient and line of best fit. Without data visualization, it would appear the datasets have no major differences as indicated by the table. 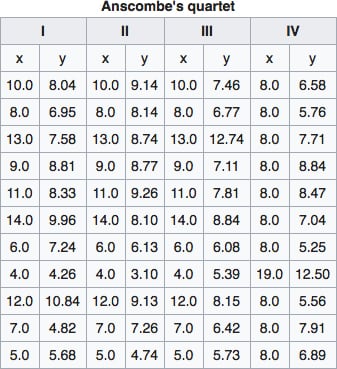 Anscombe's Quartet suggests to always plot your data rather than depend on descriptive statistics. In the case of the table above with the 4 datasets, the summary statistics did not differ, but the graphs do. 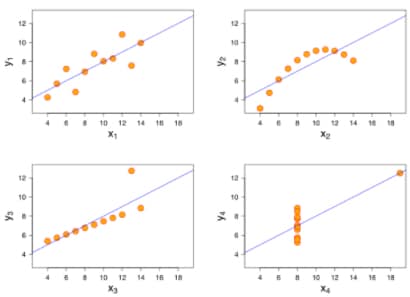 What can we see from the graphs that throw off our summary statistics?

The above example reinforces why we should use data visualization over displaying numbers. Graphics allow us to clearly see deviations or patterns in the data while tables and summary statistics do not.

Data types concepts are utilized when creating or recreating visualizations. We must understand the different kinds of data types found in data visualizations:

1. Quantitative Data - are any variables with exact numbers, which can be discrete or continuous variables.

2. Qualitative Data - are any variables with a label or category, which can be categorical or ordinal variables.

As you experiment with ways to effectively visualize data, graphs you may want to utilize to communicate quantitative messages about your use case (Trucking IoT) include: 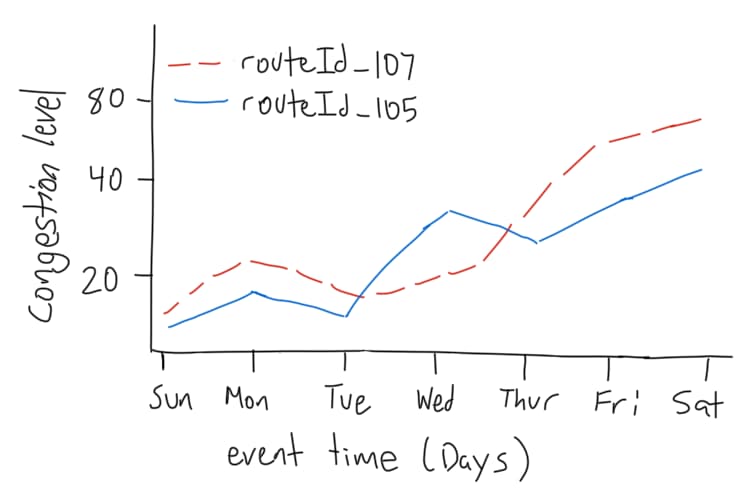 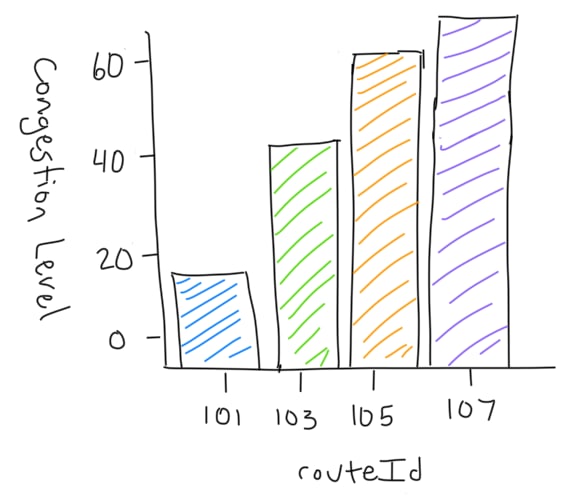 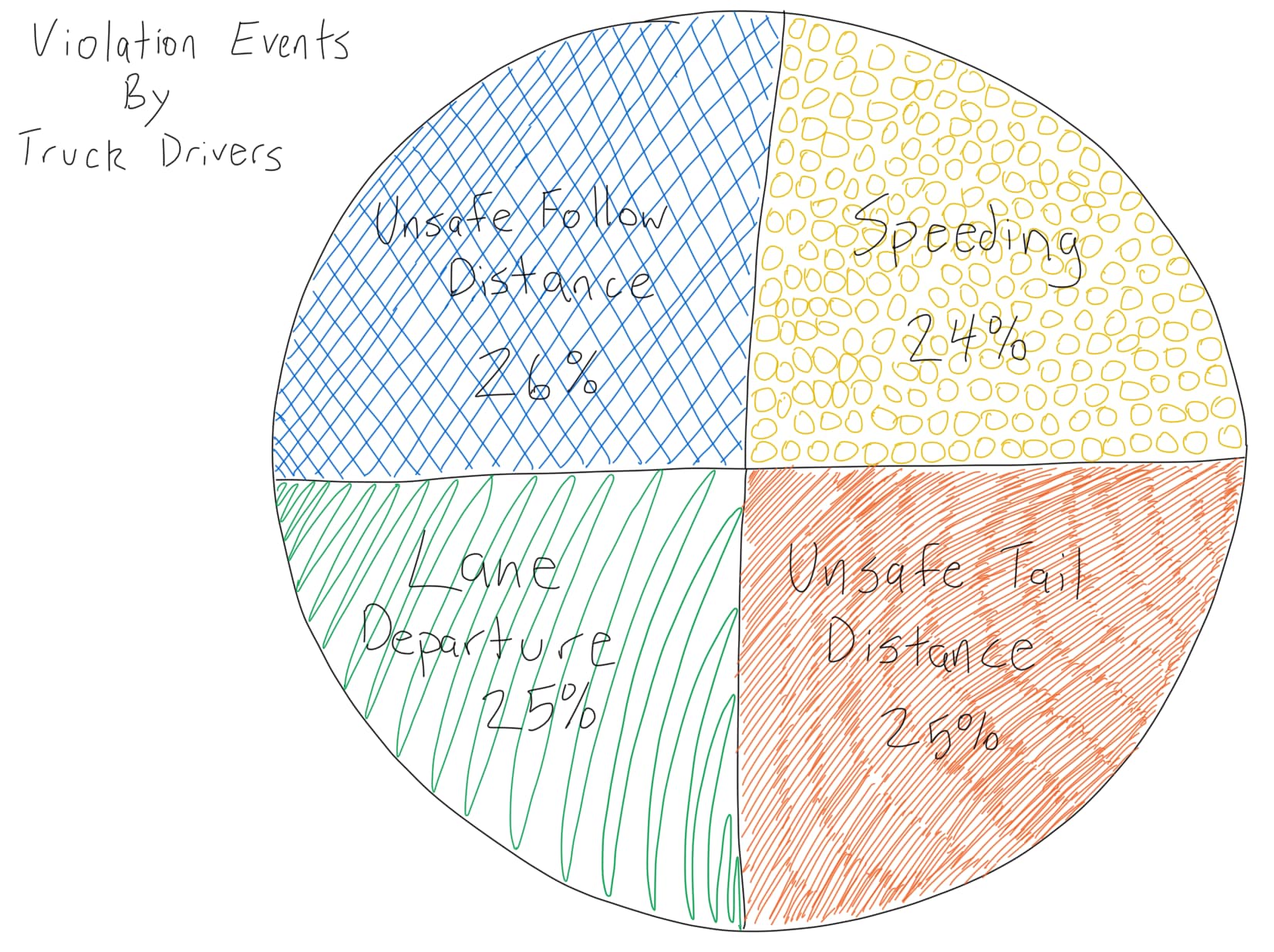 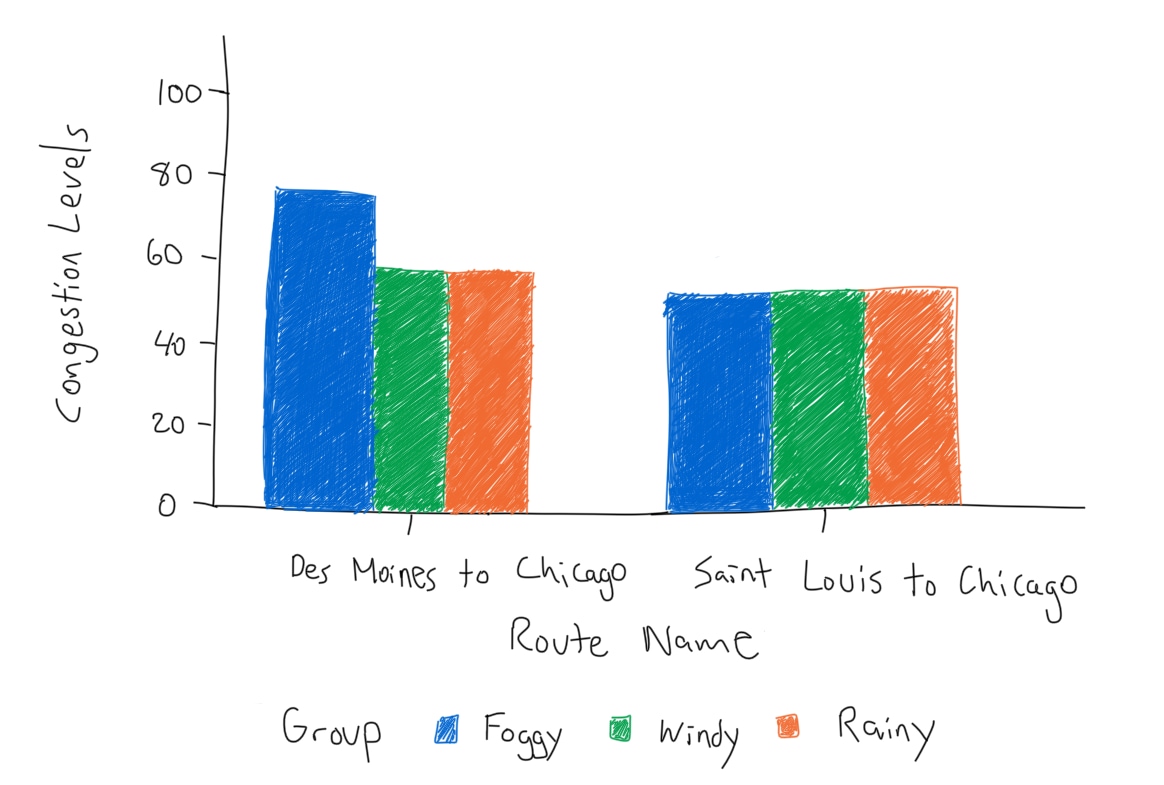 As you experiment with ways to visualize data to communicate meaningful messages and correlations, you will dabble into Exploratory Data Analysis, which is providing insight about the dataset through trial and error.

Human perception and cognition knowledge is essential for communicating the message you want to get across from the graph because all visualizations are created for human consumption. Human perception is the way humans visually process information. Thus, human visual processing involves detecting changes and making comparisons between quantities, sizes, shapes and variations in lightness. As long as properties of symbolic data are mapped to visual properties represented by that data, humans are able to browse through large volumes of data efficiently. Hence, data visualization allows the user to perform data explorations.

The first documented trace of data visualization was a Turin Papyrus Map and can be tracked back to 1160BC. Maps illustrate information about the location of geological resources and how to extract those resources. Maps also can show a thematic cartography, which is a geographical illustration designed to show a theme connected with a specific geographic area. People have also found different forms of data visualization through cave wall drawings and physical artifacts from Mesopotamian, Inca and other indigenous groups.

The invention of paper and parchment was a major breakthrough for allowing further development of visualizations. In the 16th century, techniques and instruments were developed for accurately measuring physical quantities, geographic and celestial positions. With the development of analytic geometry and two-dimensional coordinate system by Rene Descartes and Pierre de Fermat, they have influenced the methods we use to display and calculate data values.

Fermat teamed up with Blaise Pascal and their work on statistics and probability theory laid the foundation for what conceptualize as data. John Tukey and Edward Tufte's work in refining data visualization techniques allowed for this field to be inhabited by more than just the people in the Statistics field. As this technology progressed, hand-drawn visualizations evolve into software visualizations. Software visualization applications have the ability to visualize in 2D, 3D, virtually reality and augmented reality. There are a wide range of programs for visualization that have been developed: Tableau, Zeppelin, AtScale, R, Python, Superset.

Superset has an easy to use interface for exploring and visualizing data with integration for various databases (we'll use Druid). Superset has a rich set of visualizations and gives the user the ability to create dashboards to categorize your data tables. Superset also allows users to create visualization slices, which represent the actual visualization of the data table, and select the appropriate dashboard for their slice. Superset is enterprise-ready, extensible and has a high granularity security/permission model that allows intricate rules on who can access individual features and the dataset.

We're now familiar with how Apache Superset ties into our Trucking IoT Application, let's see Superset in action and create some visualization slices of our data.