The IoT Use Case

Imagine a trucking company that dispatches trucks across the country. The trucks are outfitted with sensors that collect data - data like the name of the driver, the route the truck is bound for, the speed of the truck, and even what event recently occurred (speeding, the truck weaving out of its lane, following too closely, etc). Data like this is generated very often, say once per second and is streamed back to the company's servers.

Additionally, the company is also polling an internet service for information about traffic congestion on the different trucking routes.

The company needs a way to process both of these streams of data and combine them in such a way that data from the truck is combined with the most up-to-date congestion data. Additionally, they want to run some analysis on the data so that it can make sure trucks are traveling on time but also keeping cargo safe. Oh, and this also needs to be done in real-time!

Why real-time? The trucking company benefits by having a system in place that ingests data from multiple sources, correlates these independent sources of data, runs analysis and intelligently reports on important events going on and even actions that the company can do to immediately improve the situation. This even includes catching imminent truck breakdowns before they occur and analyzing driving habits to predict accidents before the driver gets into one!

Sounds like an important task - this is where Storm comes in.

At a high level, our data pipeline requirement looks like the following. 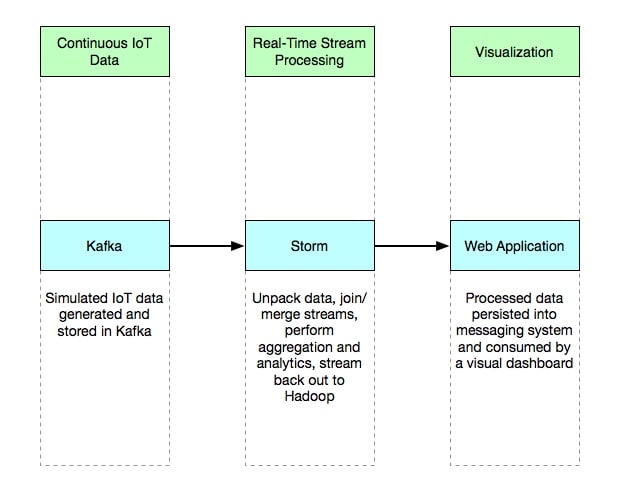 In the first section, continuous and real-time data from sensors onboard each truck is streamed to the system in real-time by NiFi and published to Kafka topics. A separate, second, stream carrying traffic congestion information about trucking routes is also streamed into the system and stored in a Kafka topic.

The second section represents the biggest requirement. We need something capable of: unpacking the compressed and serialized sensor data, merging independent streams together, performing aggregation and analytics, reserializing the transformed data, and sending streams back out for persistence and visualization. All this should be done in real-time and in distributed fashion while guaranteeing message processing and low-latency.

For these critical tasks we use Apache Storm.

The third section represents this case's post-processing step: visualizing the processed data by a web application.

Apache Storm is a free and open source data processing engine. It can process and act on massive volumes of data in real-time, performing virtually any type of operation or computation as data flows through its components.

Storm can be used for processing messages and updating databases (stream processing), doing a continuous query on data streams and streaming the results into clients (continuous computation), parallelizing an intense query like a search query on the fly (distributed RPC), and more.

Next: Storm in Action

Now that we've got a high-level overview of what our use case looks like, let's move on to seeing this use case and our solution in an actual running demo application.