We now know the role that Storm plays in this Trucking IoT system. Let's dive into the code and dissect what the code is doing and also learn how to build this topology.

Now that we have a general idea of the power of Storm, let's look at its different components, our building blocks when defining a Storm process, and what they're used for. 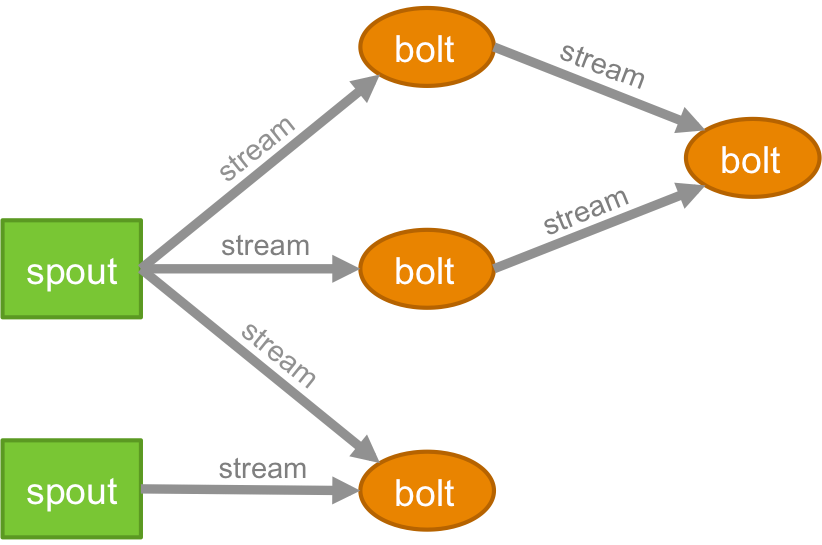 We will be working with the trucking-iot-demo-storm-on-scala project that you downloaded in previous sections. Feel free to download the project again on your local environment so you can open it with your favorite text editor or IDE.

Alternatively, if you would prefer not to download the code, and simply follow along, you may view this project directly on GitHub.

Look inside the KafkaToKafka.scala class and you'll find a companion object with our standard entry point, main, and a KafkaToKafka class with a method named buildTopology which handles the building of our Storm topology.

The primary purpose of our main method is to configure and build our topology and then submit it for deployment onto our cluster. Let's take a closer look at what's inside:

The org.apache.storm.Config class provides a convenient way to create a topology config by providing setter methods for all the configs that can be set. It also makes it easier to do things like add serializations.

Following the creation of a Config instance, our main method continues with:

Here, we invoke the buildTopology method of our class, which is responsible for building a StormTopology. With the topology that is returned, we use the StormSubmitter class to submit topologies to run on the Storm cluster.

Starting to Build a Storm Topology

Let's dive into the buildTopology method to see exactly how to build a topology from the ground up.

We start by creating an instance of TopologyBuilder, which exposes an easy-to-use Java API for putting together a topology. Next, we pull in some values from our configuration file (application.conf).

In order to build a KafkaSpout, we first need to decide what Kafka topic will be read from, where it exists, and exactly how we want to ingest that data in our topology. This is where the above KafkaSpoutConfig comes in handy.

Now that we have a KafkaSpoutConfig, we use it to build a KafkaSpout and place it in the topology.

Remember that builder refers to the TopologyBuilder. We're creating a new KafkaSpout with a parallelism_hint of 1 (how many tasks, or instances, of the component to run on the cluster). We place the spout in the topology blueprint with the name "enrichedTruckData".

Great, we now have a way to ingest our CSV-delimited strings from Kafka topics and into our Storm topology. We now need a way to unpackage these strings into Java objects so we can more easily interact with them.

Let's go ahead and build a custom Storm Bolt for this purpose. We'll call it CSVStringToObjectBolt. But first, let's see how this new custom bolt will fit into our topology blueprint.

We create a new CSVStringToObjectBolt bolt, and tell Storm to assign only a single task for this bolt (i.e. create only 1 instance of this bolt in the cluster). We name it "unpackagedData".

ShuffleGrouping shuffles data flowing in from the specified spouts evenly across all instances of the newly created bolt.

Let's dig in and see how we create this bolt from scratch: check out the CSVStringToObjectBolt.java file.

Rather than creating a Storm bolt entirely from scratch, we leverage one of Storm's base classes and simply extend BaseRichBolt. BaseRichBolt takes care of a lot of the lower-level implementation for us.

The prepare method provides the bolt with an OutputCollector that is used for emitting tuples from this bolt. Tuples can be emitted at anytime from the bolt -- in the prepare, execute, or cleanup methods, or even asynchronously in another thread. This prepare implementation simply saves the OutputCollector as an instance variable to be used later on in the execute method.

We start by extracting the value of the tuple stored under the name "dataType", which we know is either "EnrichedTruckData" or "TrafficData". Depending on which it is, we call the fromCSV method of the appropriate object, which returns a JVM object based on this CSV string.

Next, we use the outputCollector to emit a Tuple onto this bolt's outbound stream. Finally, we ack (acknowledge) that the bolt has processed this tuple. This is part of Storm's reliability API for guaranteeing no data loss.

The last method in this bolt is a short one:

The declareOutputFields method declares that this bolt emits 2-tuples with fields called "dataType" and "data".

That's it! We've just seen how to build a custom Storm bolt from scratch.

Let's get back to our KafkaToKafka class and look at what other components we're adding downstream of the CSVStringToObjectBolt.

We now have KafkaSpouts ingesting in CSV strings from Kafka topics and a bolt that creating Java objects from these CSV strings. The next step in our process is to join these two types of Java objects into one.

A tumbling window with a duration means the stream of incoming Tuples are partitioned based on the time they were processed. Think of a traffic light, allowing all vehicles to pass but only the ones that get there by the time the light turns red. All tuples that made it within the window are then processed all at once in the TruckAndTrafficJoinBolt.

We'll take a look at how to build a custom windowed bolt in the next section.

Now that we have successfully joined data coming in from two streams, let's perform some windowed analytics on this data.

Creates a sliding windowed bolt using our custom DataWindowingBolt, which is responsible for reducing a list of recent Tuples(data) for a particular driver into a single datatype. This data is used for machine learning.

This sliding windowed bolt with a tuple count as a length means we always process the last 'N' tuples in the specified bolt. The window slides over by one, dropping the oldest, each time a new tuple is processed.

The next step is to build a bolt and then place in the topology blueprint connected to the "joinedData" stream.

Before we push our Storm-processed data back out to Kafka, we want to serialize the Java objects we've been working with into string form.

These bolts, ObjectToCSVStringBolt are inverse to our previous custom bolt, CSVStringToObjectBolt. They expect tuples with Java objects and emit a CSV string representation of them. Check out the source code if you're interested in their inner-workings.

We now build KafkaBolts to push data from these streams into Kafka topics. We start by defining some Kafka properties:

Next, we build a KafkaBolt:

withTopicSelector specifies the Kafka topic to drop entries into.

withProducerProperties takes in properties to set itself up with.

Finally, we drop this bolt into the rest of the topology.

Now that we have specified the entire Storm topology by adding components into our TopologyBuilder, we create an actual topology using the builder's blueprint and return it.

Next: Deploying the Storm topology

Phew! We've now learned about how a Storm topology is developed. In the next section, we'll package this project up into a portable JAR file and run a quick command that will deploy this code onto a cluster.