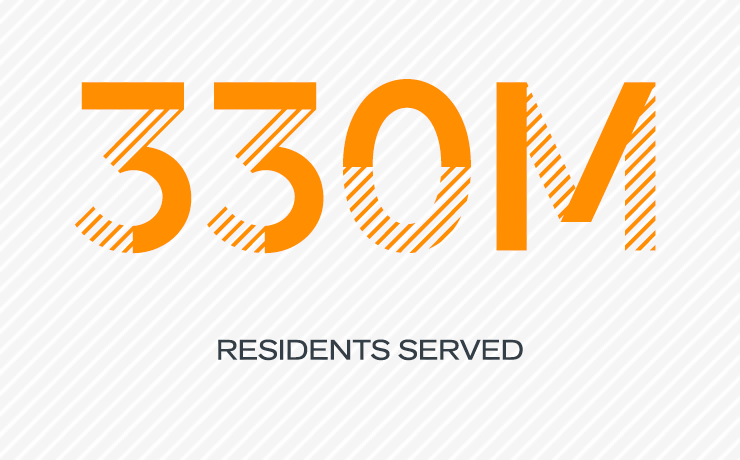 U.S. Census Bureau built an Enterprise Data Lake to bring together and efficiently analyze petabytes of data collected from the 2020 census. The EDL helps the agency keep data private and secure and uncover important insights that drive resource allocation across government.

The U.S. Census Bureau is the federal government’s largest statistical agency and the nation’s leading provider of quality data about its people and economy. Its most important initiative is the U.S. Census, conducted every 10 years, which counts every resident in the United States. It requires years of research, planning, and development of methods and infrastructure to ensure an accurate and complete count. The data collected by the census determines the number of seats each state has in the U.S. House of Representatives, and it is used to distribute more than $675 billion in federal funds to local communities. This funding supports education, healthcare, infrastructure improvements, and more.

The 2020 census requires counting an increasingly diverse and growing population of about 330 million in more than 140 million housing units. The Census Bureau must build an accurate address list of every housing unit, motivate people to respond, analyze the data, and release the results. Each stage requires significant data processing to organize data into actionable intelligence.

Prior to the 2020 census, all data was collected by paper survey, and then the data was transported to the U.S. Census Bureau and input manually. There was significant opportunity for error. Process changes for 2020, including reuse of administrative data, are designed to shrink the margin of error from collected data. Most significantly, the census will be conducted largely online instead of by mail for the first time in U.S. history. Online collection will result in petabytes of data that must be stored, analyzed, and secured.

Census leadership established the Census Enterprise Data Lake (EDL) initiative to provide big-data processing capability to fulfill petabyte-scale data management and analytics while satisfying security and privacy requirements and controlling costs. This is transforming how the agency processes demographic and economic data using open-source technology and high-performance cloud infrastructure. The EDL is the repository for research and survey data within the bureau.

The Census Bureau chose Cloudera as the data platform for the 2020 census to help mine, process and extract insights that can be used to inform important decisions at all levels of government. The platform leverages the entire technology stack and professional service offerings. Cloudera DataFlow (CDF®) is used to ingest data and provide real-time analytics. Hortonworks Data Platform (HDP®) serves as the data lake and repository for the massive amount of data collected. Hadoop Distributed File System, Apache Ranger, Apache Atlas and encryption of data at rest and data in motion are used to enable data sharing, as well as security and data governance policies.

“The EDL will support the processing of big datasets quickly and easily with large, dynamically scalable compute and storage capabilities throughout the enterprise,” says Kevin Smith, chief information officer at the U.S. Census Bureau. “The data lake also provides a centralized repository to consolidate operational paradata, response data, and cost data from multiple modes of data collection. It provides a single place to analyze all operational data and make informed decisions during operations.”

This is a hybrid deployment with much of the workloads running in AWS GovCloud. Cloudera’s consulting team augments the government and systems integrator teams on site to ensure operational success. The data platform enables scalability, flexibility, and freedom of choice for the Census Bureau by integrating with the dozens of other technology vendors involved in the massive census undertaking.

Transient clusters will be launched on demand to process survey data and store the resulting products in the data lake. A shared set of common services will enable consistent authentication, authorization, data lineage, and data governance.

The public also benefits. Responding to census questionnaires will take less time and effort because the platform enables reuse of responses as permissible, analyzes the quality of respondent data more quickly, and enables data to be easily corrected based on administrative records, Smith notes. The EDL will reduce redundant data collection while increasing the amount of data that supports the bureau’s mission.

Personal information is protected as well. The EDL enables security, privacy, and policy controls for all types of sensitive data and code at an enterprise level. As a result, the bureau can effectively manage and secure multiple, large datasets via automation and use metadata to monitor, link and aggregate datasets through the survey lifecycle until the final products are disseminated, Smith says.

The ability to tag datasets enables governance of data through authorization policies – controlling access to personally identifiable information – and also enables lineage tracking of the datasets, allowing a data analytics process to be repeatedly executed on a set of source datasets and producing the same result with each execution. Prior to the EDL initiative, it was difficult to know with certainty how a dataset was transformed from one state to another.

In addition, authorization policies can be created so that multiple users can access the data without making copies of the original. As a result, data scientists will be able to share data and insights more easily within the bureau and across agencies, while adhering to policies for security and data governance. Because of this new capability, the Census Bureau is able to help other agencies derive insights from the data to ensure that resources are provided to those who need them and the government can plan for future needs through insight into the patterns of population growth and change.

The 2020 census is a massive undertaking to ensure that everyone living in the United States is counted. The Enterprise Data Lake enables us to efficiently process the vast amounts of data we anticipate generating in 2020 via massively parallel processing and taking advantage of cloud-based infrastructure.